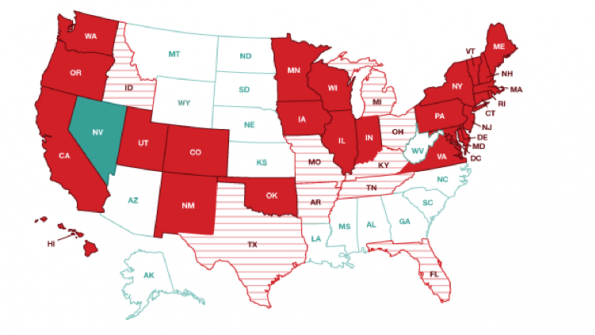 As of Oct. 6, 2014, more than half of all Americans live in states that offer same-sex marriage.

The U.S. Supreme Court on Monday let stand lower court rulings that struck down bans on same-sex marriages in five states: Indiana, Oklahoma, Utah, Virginia and Wisconsin. The Wall Street Journal reports the court’s move to decline considering states’ requests to reinstate bans demonstrated the justices’ lack of urgency to rule on whether same-sex couples across the country have a constitutional right to marry.

According to Freedom To Marry, 24 states as well as Washington D.C. now allow same-sex couples to wed. In five additional states – Kansas, North Carolina, South Carolina, West Virginia and Wyoming – federal appellate rulings have set a binding precedent in favor of same-sex marriage – meaning it will soon be legal. In 10 additional states, judges have issued rulings in favor of same-sex marriage, and are now awaiting federal appellate court action.

According to the organization, these rulings mean over 54 percent of the U.S. population lives in a state where same-sex couples can marry, and soon, that number will be higher.

"The court's letting stand these victories means that gay couples will soon share in the freedom to marry in 30 states, representing 60 percent of the American people," Evan Wolfson, president of Freedom to Marry, told USA Today. "But we are one country, with one Constitution, and the court's delay in affirming the freedom to marry nationwide prolongs the patchwork of state-to-state discrimination and the harms and indignity that the denial of marriage still inflicts on too many couples in too many places."

USA Today reports Wolfson is correct – what happens next will occur in stages, as the lack of a Supreme Court ruling is allowing states to make their own – sometimes incongruous – decisions. The five states where petitions were denied must allow same-sex marriages immediately, in the other six, the attorneys general must clear the way, likely with another court case.

Opponents of same-sex marriage say they will continue the fight, despite the court's decision. "Several federal courts… still have cases working their way to the Supreme Court," Byron Babione, senior counsel at Alliance Defending Freedom, which had defended the Oklahoma and Virginia bans, told USA Today. "The people should decide this issue, not the courts."

For a complete breakdown of where all state laws stand, click here. To see all pending marriage litigation, click here.