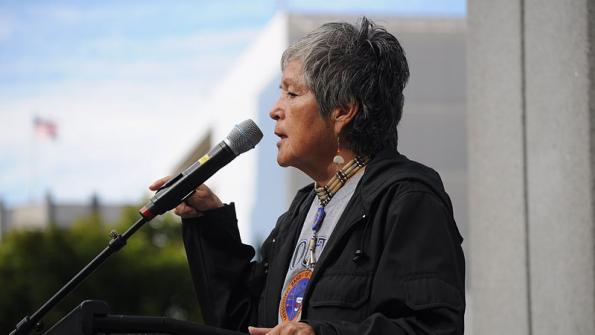 Activists for Native American culture have pushed for the second Monday of October to be recognized as Indigenous Peoples Day rather than Columbus Day, and some of them have found success in such cities as Albuquerque, N.M., Portland, Ore. and Minneapolis.

Monday marked the 81st anniversary of celebrating one of the world’s most renowned explorers. For some, Columbus Day has a negative connotation, so a growing number of cities have countered the federal holiday honoring Christopher Columbus with a celebration of Native Americans, leading to conflicting stances on whom the day should venerate.

Activists for Native American culture have pushed for the second Monday of October to be recognized as Indigenous Peoples Day for several years, and those local leaders have recently found success in such cities as Albuquerque, N.M., Portland, Ore., and Minneapolis, according to the Associated Press.

Albuquerque’s city council recently upheld the second Monday of October as Indigenous Peoples Day, according to The Guardian. Though some municipalities are newly celebrating the day as an homage to Native Americans, South Dakota has recognized the day since 1990, and Berkeley, Calif.,  has since celebrated the holiday since 1992.

“For the Native community here, Indigenous Peoples Day means a lot. We actually have something,” Nick Estes of Albuquerque, who is coordinated a celebration Monday after the city council’s decision, told the publication. “We understand it’s just a proclamation, but at the same time, we also understand this is the beginning of something greater.”

The supporters of Indigenous Peoples Day say parades and other forms of commemoration for Columbus Day disregard the bloody history of colonialism, enslavement, land takeovers and discrimination that ensued following Columbus’ arrival to the Americas in 1492.

Last year, the Seattle City Council unanimously voted to change the federal Columbus Day holiday to Indigenous Peoples Day, making it the second major U.S. city after Minneapolis to adopt the change, according to Reuters.

On the other side of the debate, Columbus supporters say the decades-long backlash of the Columbus holiday takes away from what the explorer symbolizes,  which is the “centuries of cultural exchange between America and Europe,” Anna Vann, Denver resident and member of the Sons of Italy, told the Associated Press. Protests have ensued during her city’s Columbus Day parade.

“It’s been a struggle to even get people to come and attend the parades as spectators,” Vann said. “It’s a celebration of when the Europeans came over and started their lives here. We wouldn’t be where we are today if it weren’t for this history.”

Though the debate continues on whether to change the holiday on the national level, the number of local governments opting to change the holiday continues to grow. Like in the case of Oklahoma City, Okla., where this week local leaders were scheduled to vote on a bill designating the ubiquitous Columbus Day holiday as Indigenous Peoples Day, according to NBC affiliate KFOR.

“This is something that I’ve struggled with for a long time,” Sarah Adams-Cornell told the station last month. “The fact that our country, our state and our city celebrate this holiday around this man who murdered and enslaved and raped indigenous people and decimated an entire population.”