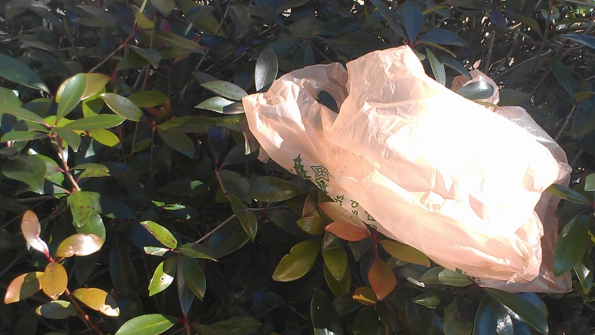 As of  Jan. 1, Los Angeles grocery shoppers no longer have a choice between paper or plastic.

Because of a new law, large Los Angeles grocery stores will no longer be permitted to offer plastic bags to customers, according to The Los Angeles Times. Smaller grocers will have to follow suit by July.

The argument against plastic bags is largely environmental. Citing data from the Environmental Protection Agency, National Geographic reports anywhere between 500 billion to 1 trillion of these bags are used worldwide per year. Many of the bags end up in the litter stream (that is to say, not in landfills), polluting soil, waterways and the ocean.

Passed last June, Los Angeles’ ordinance banning single-use plastic bags reads: “Billions of plastic single-use carryout bags are consumed in the city of Los Angeles each year. These bags negatively impact the environment and create a blight of litter that is pervasive in the public landscape, including parks, streams, beaches and streets.”

Los Angeles is the largest American city to enact a ban on the bags, The Los Angeles Times reports, but about 90 other locales have already passed similar measures. Municipalities banning the use of single-use plastic bags include Morgan Hill, Calif.; Tumwater, Wash.; Santa Fe, N.M.; Olympia, Wash.; Sunset Valley, Texas; Larchmont, N.Y., and dozens of others, according to the Plastic Bag Ban Report, a reference site on the topic.

Businesses violating the new law in Los Angeles will face fines, according to KTLA5 – $100 for the first offense, $200 for the second and $500 for the third. Many grocers plan to sell reusable bags, or offer paper bags for a small fee.