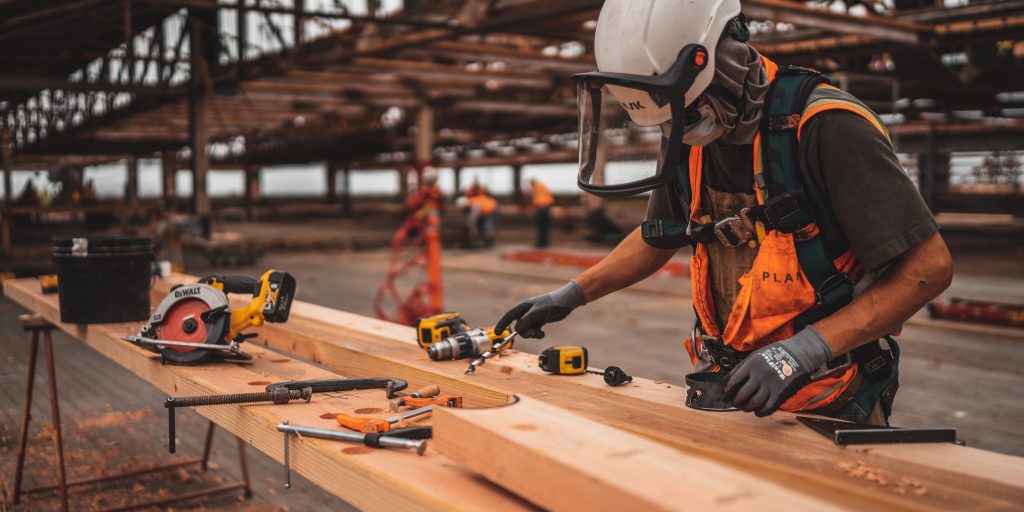 On November 15, 2021, President Joe Biden delivered on a key part of his domestic agenda when he signed into law the Infrastructure Investment and Jobs Act, a $1.2 trillion infrastructure and jobs bill. In so doing, President Biden also fulfilled a major campaign promise to the building and construction trades unions that his administration would work to “rebuild America’s crumbling infrastructure” and would “prioritize Project Labor and Community Workforce Agreements” in doing so.

This piece examines Project Labor Agreements (PLAs), explaining what they are, why they are important and how the infrastructure bill may facilitate their use and job opportunities to communities that have historically been marginalized or excluded by the building and construction trades.

Overview of PLAs
PLAs are pre-hire labor agreements that establish the terms and conditions of work on construction projects. PLAs are intended improve the efficiency of project delivery by improving labor relations and reducing the potential for labor strife between the contractors and workers and among workers. To accomplish this objective, PLAs typically include provisions for resolving grievances between contractors and workers and jurisdictional disputes between workers in different construction trades. Most importantly, PLAs prohibit strikes, lockouts, and other work stoppages and slowdowns that would adversely affect project delivery.

The building and construction trades unions favor PLAs because the agreements generally include other provisions that align with labor interests, including: that union hiring halls refer all workers to the project; that workers referred to perform project work pay union dues for their time on the project; and that contractors contribute to union trust funds for workers’ retirement and health care. Groups that are aligned with nonunion contractors often oppose the use of PLAs as imposing a competitive advantage for union contractors that normally operate under PLA-like conditions.

While many state and local governments have adopted PLAs for construction projects in their respective jurisdictions, the use of PLAs at the federal level has depended largely on the party occupying the White House, with Democrats favoring the use of PLAs and Republicans opposing them. In 2009, President Obama issued Executive Order (EO) 13502, which encouraged executive agencies to require PLAs on “large-scale construction projects” where the cost to the federal government was $25 million or more. While President Trump did not rescind the Obama-era order, his administration did not invest in PLAs. President Biden, on the other hand, with his “Build Back Better” campaign message has made infrastructure spending and PLAs a key part of his first term domestic policy agenda.

“A blue collar blueprint to rebuild America”
After the House of Representatives passed the infrastructure bill, President Biden hailed the bill as “a blue collar blueprint to rebuild America” and a “once in a generation investment that’s [going to] create millions of jobs.” Importantly, most of the jobs that will be created will not require a college degree. Rather, most of these jobs will require only a high school diploma or equivalent and an apprenticeship or journeyperson credential in one of the construction or building trades.

Jobs in the building trades can provide a means of socio-economic mobility to individuals in lower income brackets, and PLAs can facilitate entry into and advancement in the building trades. Certain PLAs expressly address these types of issues by providing hiring preferences to small businesses, disadvantaged businesses, and women-owned business, by providing pre-apprenticeship and apprenticeship opportunities, and by hiring individuals from local communities to perform project work. The infrastructure bill invests in each of these areas, providing for geographic or economic hiring preference to encourage workforce diversity, the creation of pre-apprenticeship opportunities that will address barriers to employment among traditionally unrepresented populations, and education and job training for underrepresented groups.

Huge potential for expansion of PLAs
President Biden’s commitment to PLAs coupled with $550 billion in new infrastructure spending signals a potentially dramatic increase in the number of PLA projects that the federal government approves over the next decade.

Consider that, in the decade following the issuance of EO 13502 in 2009, the Federal Highway Administration (FHA) approved more than 400 PLA projects with a total contract value of more than $11 billion, and in the next five fiscal years, the infrastructure bill will provide approximately $300 billion in federal funding for highway and highway safety construction alone, not to mention the other three-quarters of the funding in the bill. Should the FHA require that all “large-scale construction projects” use PLAs, the FHA could theoretically fund up to 12,000 PLA projects. While this theoretical limit is just that, the potential exists for a huge increase the number of PLAs.

President Biden’s campaign promise of Build Back Better and the enactment of the infrastructure bill will undoubtedly spur job growth in the building trades over the next decade. The question is for whom.

It remains to be seen whether the infrastructure bill’s targeted hiring and job training provisions will create transformational change in the construction industry as the Biden Administration intends, or whether investments in such programs will be criticized as inefficient and targeted for reduction in future years. State and local governments, particularly those that have not previously adopted PLAs to govern their construction projects should familiarize themselves with the key provisions of such agreements because proponents and opponents of PLAs, and community groups that advocate for targeted hiring and job training provisions as parts of such agreements, will likely become more active in lobbying on these issues in the coming years.

LCW Associate Alexander Volberding has spent his career working for and with public agencies. He is a member of the firm’s Labor Relations practice group and has broad and deep experience working with a wide range of collective bargaining statutes, including the National Labor Relation Act (NLRA) and the Meyers-Milias-Brown-Act (MMBA). Volberding is well-versed in bargaining strategy and tactics and negotiates collective bargaining agreements with employee organizations and Project Labor Agreements (PLAs) with building and construction trades councils. He can be reached at [email protected].