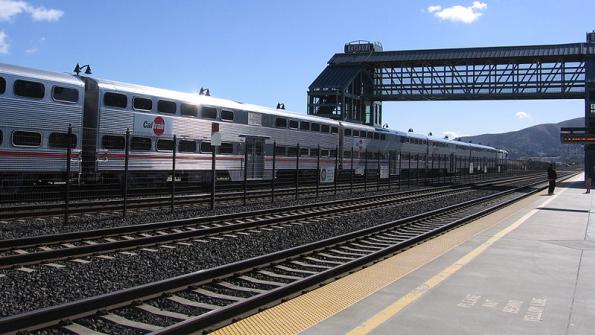 President Trump is expected to unveil a budget outline by mid-March, and transit leaders across the country are advocating for transit investments as part of the president’s previously proposed $1 trillion infrastructure package.

President Trump is expected to unveil a budget outline by mid-March, and transit leaders across the country are advocating for transit investments as part of the president’s previously proposed $1 trillion infrastructure package.

The American Public Transportation Association (APTA) announced on Monday that recent estimates show that a $200 billion investment in public transportation would create 10 million jobs over 10 years and add $800 billion to the U.S. gross domestic product over the following 20 years, The Hill reports.

“Seventy-three percent of all capital money that goes into transit flows back into private sector,” APTA President Richard White said during a news conference, per The Hill.

Other heads of transit agencies have stated the need for transit investment and the involvement of the federal government in it. The Washington Metrorail has undergone numerous operational and safety issues over the past few years; Metro General Manager Paul Wiedefeld called the it “the prime example of [what happens] when you don’t invest in infrastructure,” according to The Hill.

“We are doing a lot of innovative things in Chicago, but we cannot do it alone,” Dorval Carter, president of the Chicago Transit Authority, said, per The Hill. “The government has historically been a partner in infrastructure investment, and we need them to continue to be a partner going forward.”

The Trump Administration is expected to release its “skinny budget,” or budget outline for FY 2018 in mid-March, Politico reports. The budget will serve as a framework for Congressional leaders crafting budget resolutions in the spring.

Trump has advocated for transit investment in the past. In a 2015 interview with The Guardian, he said, “We have to spend money on mass transit. We have to fix our airports, fix our roads also in addition to mass transit, but we have to spend a lot of money.”

However, the Trump Administration has already delayed funding to at least one transit authority. In February, the Federal Transit Administration delayed a $647 million grant intended for Caltrain, which serves as the San Francisco Bay Area’s commuter rail system, according to Wired and the New York Times. The grant would have given Caltrain electrified rails, allowing it to stop running on diesel, Wired reports. The switch would also have reduced travel times and allowed more passengers to ride the trains.

The calls for transit investment arrive on the heels of the American Society of Civil Engineers (ASCE)’s release of its 2017 Infrastructure Report Card, which gave America’s overall infrastructure a grade of D+.

Transit however, scored a D- in the report.