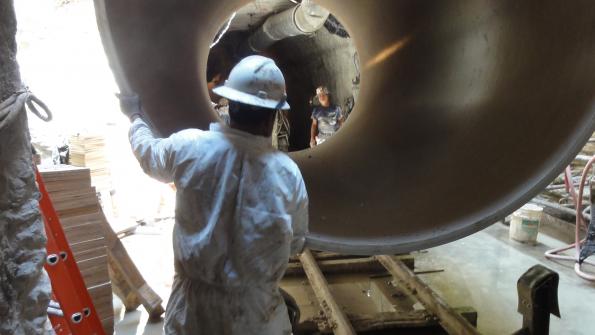 Austin’s Downtown Wastewater Tunnel was constructed to alleviate the stress on the two major sewers that were running at capacity. These sewers serve downtown Austin, running along the north and south shores of Lady Bird Lake, a reservoir on the Colorado River in downtown used primarily for flood control and recreation. The added capacity from the new tunnel takes sewer flows from both existing lines to prevent sewer overflow and provides the additional capacity needed for existing and future expansion in the downtown area. Another benefit of the project is that several lift stations were taken offline by the Austin Water Utility, thus improving the efficiency and reliability of the system.

Due to the sewer’s proximity to downtown, Austin selected tunneling methods to avoid major public disruption. The five shaft locations were also chosen based on geotechnical investigations. The project includes over 3.5 miles of gravity tunnel 50 to 80 feet deep and crosses under Lady Bird Lake three times, picking up flows from several interceptors.

Designed by the Austin office of Parsons, an engineering and construction company, the project includes 54-inch- through 90-inch- diameter centrifugally cast fiber reinforced polymer mortar (CCFRPM) HOBAS pipe. The design considerations included the varied geologic profile and the crossing of several fault zones, design flows and the maintenance of adequate flow velocity. Because the tunnel passes through populated areas and would be difficult to repair in the future, a long service life was critical and the use of corrosion-resistant materials imperative.

HOBAS has supplied many projects in the Austin area. Many of these projects have been in environmentally sensitive areas such as the Sunset Valley – Travis County Wastewater Interceptor, which is buried within the Edwards Aquifer recharge and transition zones. The Austin project gained approval on the basis of providing a zero leakage system. All pipes for this project tested leak-free on their first test, without any pressure drop during the one-hour five-psi air test.

The designer chose CCFRPM pipe for its corrosion resistance and long life, but project contractor SAK lauded the quick installation and leak-free service of the couplings. “The entire length of the project was below the water table and therefore infiltration testing was performed. All pipe passed the infiltration test,” says James Byrd, SAK senior project manager. Substantial completion of the project, he says, was three months ahead of the originally scheduled completion date.