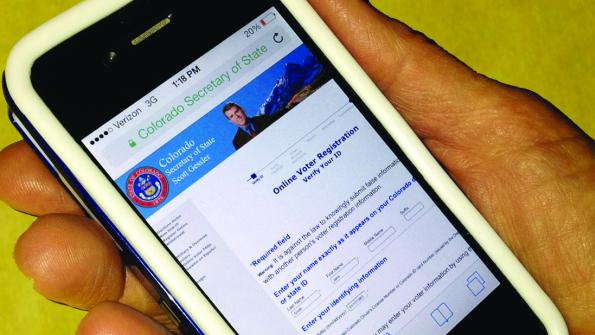 According to the Pew Center on the States, approximately 25 percent of people who are eligible to vote are not registered. U.S. Census Bureau data shows the most common reason people don’t vote is not that they believe their vote is insignificant, but rather that they are too busy.

In the 2012 election, GoVoteColorado.com enabled Coloradans to register to vote through its mobile device, making the process more accessible and suitable for today’s technology-driven lifestyle.

Before starting the process, the department conducted extensive research. Ultimately, it decided to optimize the website for use by mobile devices (i.e., responsive web design), rather than develop a traditional app, in order to maximize the online registration tool’s accessibility and likelihood for use.

“Our goal was to establish a solution that will not need to be constantly retooled and redeployed, as new devices and operating systems inundate the consumer market,” Colorado Secretary of State Scott Gessler says. “This project helps us meet our goal to make it easy to vote but tough to cheat.”

The successful initiative had more than 80,000 Coloradans added to the voter registration rolls through the site from September to October of 2012. More than 229,000 total submissions and updates to existing registrations were logged between Aug. 31 and Oct. 9, 2012. Approximately 20 percent of these submissions were via the mobile version of GoVoteColorado.com.

Anticipating traffic volumes and required server capacity was difficult as the initiative was a first of its kind. When extremely high traffic volumes temporarily knocked the system offline, the team, supported by the contractor, had “all hands on deck,” adding computer capacity and keeping downtime to a minimum. The server was back up for the majority of the day and 1,268 people were able to register or change their registration in the last hour before the registration deadline.

The mobile-optimized online registration site offered another way for Coloradans to register without having to use a paper form. Paper registrations are more prone to error and require more time to process.

As a result of the project’s success, Gessler earned a National Association of State Chief Information Officers (NASCIO) State Technology Innovator Award. Looking forward, the team is reviewing what went well and improvements that can be made for future elections.