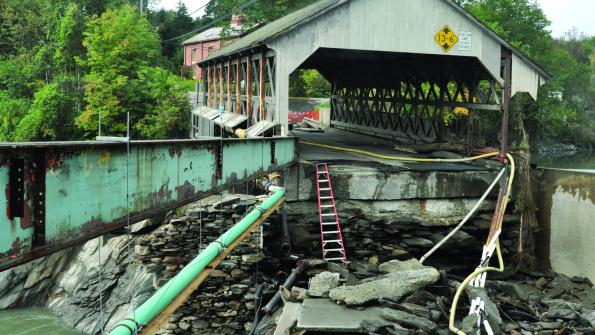 Local governments should be prepared for the possibility that funding for permanent restoration projects may be delayed.

The numerous natural disasters that struck the nation in 2011 — including deadly tornadoes, wildfires and Hurricane Irene — severely depleted the Federal Emergency Management Agency’s (FEMA) Disaster Relief Fund (DRF), and political wrangling in Washington briefly threatened to hold up critical funding for some stricken communities in September. Although the issue is settled for now, a major disaster could renew the debate, some experts say, therefore, local governments should be prepared for the possibility that funding for permanent restoration projects may again be delayed.

In Bennington, Vt., where Tropical Storm Irene created massive flood damage, Town Manager Stuart Hurd says town leaders were aware that federal relief funding was limited and without congressional action, additional funding might be even more limited. Faced with public safety concerns, the town took out a $5 million line of credit to cover $4.2 million in contracted repairs to begin recovery work on a 2.5-mile stretch of the Roaring Branch River to remove debris and sediment and reestablish the channel — costs the city will be on the hook for if DRF funding is curtailed.

Two months after the storm, FEMA had not yet ruled on whether the city would be reimbursed for its work. “Given the current political environment, I would not be surprised to see delays in the funding stream,” Hurd says. “We trust that Congress will do the right thing, although sometimes I wonder.”

Although Mitch Herckis, senior legislative council for the Washington-based National League of Cities, says there is no real way to prepare for future DRF holds, the best advice he can offer communities is to be prepared to show their congressional representatives and the media what the lack of funding means in terms of closed schools, cuts in services and pain for small businesses when main street is not properly repaired. “When Congress does not fund the DRF, it delays both the recovery of our communities and with it the economic prospects of its citizens,” Herckis says.