As Congress once again is locked in a contest of wills that threatens to hold up disaster recovery money needed by states hit by Hurricane Irene and a series of recent disasters, some local government associations are calling for a resolution to the conflict. 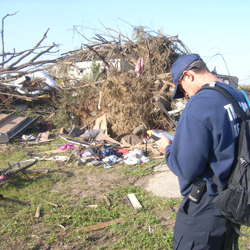 As Congress once again is locked in a contest of wills that threatens to hold up disaster recovery money needed by states hit by Hurricane Irene, Tropical Storm Lee, and a series of recent wildfires and tornadoes, some local government associations are calling for a resolution to the conflict. The most recent debate centers around a spending bill that must be passed by Sept. 30 to fund federal agencies, including the Federal Emergency Management Association’s Disaster Relief Fund (DRF).

Last week, the Republican-controlled House of Representatives passed a short-term bill that included additional money for the DRF, which have has almost depleted their its resources due tobecause of the recent disasters, according to CNN.com. However, Senate Democrats defeated the House measure on Friday, complaining that it included spending cuts elsewhere to offset some of the additional disaster relief money.

Speaker of the House John Boehner, R-Ohio, and Senate Majority Leader Harry Reid, D-Nev., both released statements on the conflict. Reid said the House bill was “not an honest effort at compromise.” “The Senate passed a bipartisan bill to get disaster relief to the people who need it as quickly as possible,” Reid said in a statement Friday. “The Federal Emergency Management Agency could run out of money as soon as Monday. People who need help will not get it. We cannot allow that to happen. House Republicans should stop playing political games, and pass the Senate’s bipartisan bill without delay.”

Boehner said in a blog that “Senate Democrats can prevent any gaps in disaster relief efforts and avoid the very real possibility that FEMA will run out of vital disaster emergency funding by passing the House bill today.” “The House-passed bill provides an immediate infusion of $774 million in disaster relief funding, $226 million in flood control funding, and another $2.65 billion for disaster aid efforts available immediately on Oct. 1, more than enough until Nov. 18 (the length of the House-passed [continuing resolution]),” Boehner wrote in his blog.

The Washington-based National League of Cities (NLC) released a statement Thursday urging Congress to replenish the DRF. “The [DRF] is the mechanism through which the federal government provides assistance to overwhelmed state and local governments after disasters. It helps get families back on their feet by providing the resources necessary to help communities remove debris, rebuild roads, reopen schools, and restore critical services,” NLC Executive Director Donald Borut said in the statement. “This has been one of the most difficult years on record for cities and towns. As a result of natural disasters across the country, the fund is now at a dangerously low level, leaving the real possibility that the federal government will be unable to help areas fully recover. With 82 major disaster declarations in 48 states this year accounting for $10 billion in damage, our communities are reeling.”

Borut also said that the deal Congress reached to raise the nation’s debt ceiling last month, which was also preceded by a cCongressional stalemate over how to balance the federal budget, clarified that it is not necessary to offset disaster spending. “Americans should not have to choose between rebuilding their communities and rebuilding the American economy,” Borut said.

The Lexington, Ky.-based National Emergency Management Association (NEMA) also released a statement urging Congress to take quick action to fully fund the DRF. “We realize the difficulty in determining the true cost of existing disasters, but encourage Congress to allocate the amount which will successfully closeout all open disasters, satisfy the requirements of the current disaster impact between now and the end of the fiscal year, and fully fund the DRF for fiscal year 2012 with all possible haste,” NEMA said in its statement. “People who have been hurt by disasters and emergencies — those that just happened and those yet to happen — are depending on being able to get assistance from this fund.”