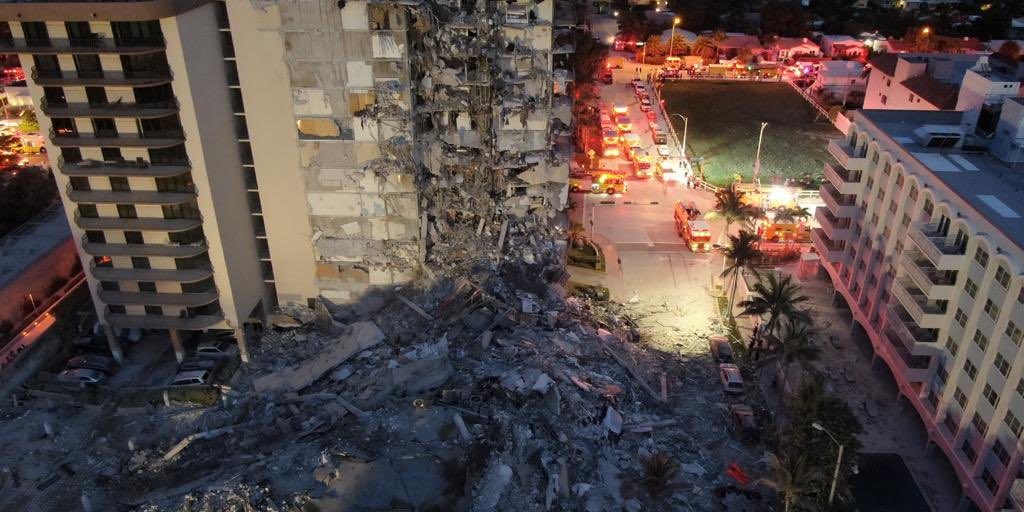 Around 1:30 a.m. on the morning of June 21, a large section of the 12-story Champlain Towers South condominium building in Surfside, Florida collapsed. All but one person sleeping inside the 136-unit building—renters, owners, visitors, family and friends—perished.

“Except for a 14-year-old child, who was discovered near the top of the two-story tall pile of rubble, first responders were not successful in rescuing any survivors. They recovered and identified remains for 98 known persons who died in this tragic event,” reads a recently published “Final Report of the Miami-Dade County Grand Jury” about the condo’s collapse.

While the cause of the building’s collapse hasn’t yet been officially determined by the National Institiute of Standards and Technology, a known contributing factor is degradation of reinforced structural supports due to long-term water penetration. The problem was reported in 2018 and noted to have substantially worsened a month before the collapse.

A $15 million repair program had been approved, but work hadn’t yet begun.

While the report’s scope is focused on the South Florida region, its findings will undoubtedly be considered in building departments across the United States, given the attention that was given when the Surfside condo collapsed. The report centers around “the policies, procedures, protocols, systems and practices of many of the participants involved in making sure that buildings in our communities are designed and constructed in a safe manner, that residents of those buildings effectuate timely and appropriate maintenance of their buildings so that they remain safe and habitable, and officers and officials exercise appropriate oversight to ensure all of the above.”

Chief among those is a recommendation that the Miami-Dade County Ordinance’s current 40-year recertification requirement be reduced by about three-quarters. Notably, Champlain Towers South was built in 1981 and board members were just getting started on the 40-year inspection process when it fell. But due to a number of reasons including South Florida-specific environmental conditions, “A lot can happen to a building in 40 years,” the report says, highlighting a previous tragedy, the partial collapse of the federal building that housed the United States Drug Enforcement Administration (DEA) Miami Field Division in 1974, which killed seven people and prompted officials to implement the current policy.

The DEA building was built in 1925, “making it 49 years old at the time of the collapse,” the report says. But even with the historic precedence, prior to the Surfside tragedy, “out of Florida’s 67 counties, Miami-Dade County and Broward County are the only two which impose compliance with the South Florida Building Code and its 40-year recertification requirement.”

Building on the county’s current code, the report recommends “the initial detailed certification inspection (should) be performed no less than 10 years and no more than 15 years after completion of construction of the condominium building or other residential property with updated reports every 10 years thereafter.”

Other recommendations related to inspection and maintenance include a 10-year exterior repainting and waterproofing requirement, and an annual mandate requiring that condo boards “file a document certifying that regular and routine maintenance of all components impacting structural integrity of the building has been conducted at their building within the past 12 months.”

The grand jury also found that stricter qualification standards for inspectors and a general tightening of professional expectations should be considered, along with “’a duty to report’ … imposed on professional engineers and architects who conduct building inspections. At the time they provide copies of inspection reports to the condo board or owners of buildings which meet the threshold definition, they should be required to provide a copy of the same report to the local building official.”

Given the increased number of cases under review following the Florida tragedy and to meet future demands, the report concludes that building department budgets should be expanded so that more inspectors can be hired, along with “the creation of a special unit of investigators who would be trained and qualified to investigate these important cases that seem to fall through the cracks.” Among the unit’s duties, it would be responsible for “conducting investigations of criminal conduct involving directors who serve on condo boards.”