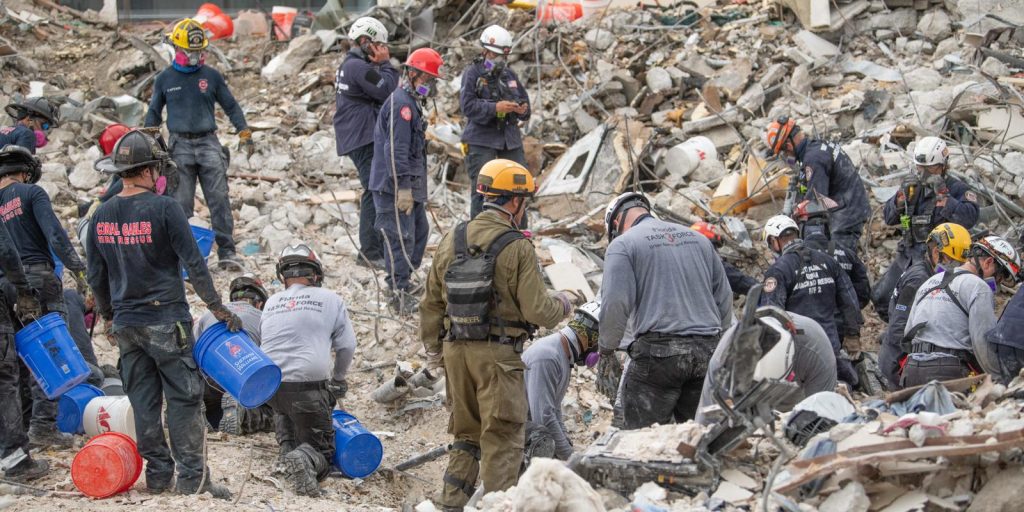 Nearly 50 years before the partial collapse of Champlain Towers South in Miami last month, rescue workers searched for survivors through the wreckage of a 30-year-old federal office building that collapsed suddenly in 1974 in downtown Miami. Seven people died.

Officials later determined the building failed because of concrete deterioration. In the aftermath, Miami-Dade County created a 40-year recertification policy to make sure older buildings were structurally safe. In 2005, neighboring Broward County adopted the policy, which is strict in comparison to other United States cities.

Champlain Towers South, a 12-story beachfront condominium in the suburb of Surfside, was completed six years after the federal building fell. It was due for its 40-year safety recertification next year, in 2022; county officials were already working with the condo association to make sure the building complied with the region’s reinspection requirement.

Given Florida’s propensity to experience hurricanes and saltwater corrosion, the state’s building code, which has been updated a number of times following disasters, is as a whole comparatively robust.

“When Hurricane Andrew hit South Florida in 1992, it revealed the deficiencies of the state’s existing building code compliance and enforcement processes. Andrew broke all records for insurance losses, and was the direct cause of Florida’s worst insurance crisis in history,” according to an overview of the code by the Florida Housing Finance Corporation (Florida Housing), a state-created agency that works to make affordable housing more accessible.

As time moves forward in this Miami tragedy, with dozens pronounced dead and more than 70 still missing, legislators across the state and nation will undoubtedly take another look at building inspection standards, as did Miami-Dade County in 1974. Likewise, in the coming months, local leaders from Florida to California will reconsider their approach to building safety at the city level, brainstorming ways to ensure their communities aren’t in danger.

“Municipalities are probably all taking a look at the buildings within their jurisdictions, saying, ‘my god, is this possible where we are and how can we prevent it?’” said Jeff Roth, a former government planner who worked for more than a decade in New York and recently authored the book “Fires, Floods, and Taxicabs: Taking a Bite Out of Big Apple Bureaucracy.”

In considering lessons that can be learned from what happened in Florida, Roth says he recalled his time working with New York’s fire department. With a small team of data scientists, Roth helped create fire danger risk models that, in turn, helped firefighters prioritize particularly dangerous structures.

Using data that was already available, such as whether or not a structure had a fire suppression system, “We created a database, an inspection program that created a risk-point,” Roth said. He says a similar approach could be adapted to structural building safety.

While the focus was not necessarily on structural safety issues, “the same sorts of rules apply.”

As hiring a team of engineers to inspect all the buildings in town might not be fiscally possible, Roth suggested that cities of all sizes might bring in experts from across municipal specialties—“not just the engineers, but the firefighters (and people like environmental experts), you bring all these various folks to the table,” he said. In collaboration, they can work to “Identify all the key things that might point to their being a structural issue.”

Complaints of rubbish outside a structure might point to delinquent maintenance, for example; likewise, “Is there a way to look at companies that were late on paying their taxes, does that point to negligence?” Roth asked, noting that any city official who enters structures or interacts with building owners can provide a unique perspectives and help experts identify which structures should be looked at more closely.

“The bottom line is that, while structural inspections in a building are one component in the touch-points of a building by a municipality, there are others (who interact with buildings in various capacities),” Roth continued.

Tangentially, Roth pointed to the National Fire Prevention Association’s (NFPA) Smart Fire Fighting program that, similar to New York’s approach, leverages existing data to prevent catastrophic fires from happening. A summary report from the National Institute of Standards Technology (NIST) describes the Smart Fire Fighting initiative, which is still in development, as “An evolving range of databases and sensor networks … tapped to create, store, exchange, analyze and integrate information into critical knowledge for the purpose of Smart Fire Fighting.”

According to Roth, applying this approach to the realm of building safety looks like “Bringing the experts together and getting them sitting at the same table, (which is) something a small community can do. It is actionable.”