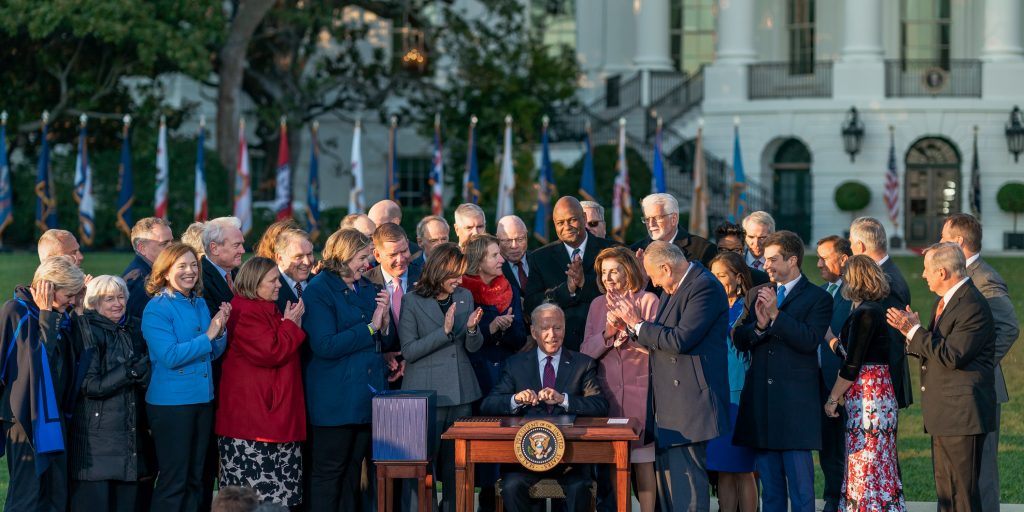 After months of negotiating support for his $1.2 trillion bipartisan infrastructure spending package, President Joe Biden signed the “Infrastructure Investment and Jobs Act” Monday on the White House lawn, surrounded by a bipartisan group of legislators that helped pass it through Congress.

“This law makes this the most significant investment in roads and bridges in the past 70 years. It makes the most significant investment in passenger rail in the past 50 years and in public transit ever,” Biden said. “This law is going to make high-speed Internet affordable and available … everywhere in America—urban, suburban, rural—and create jobs laying down those broadband lines.”

The historic initiative replenishes (and in some cases expands) existing grant programs and injects an additional $550 billion in new investments into America’s infrastructure. Analysts estimate it will add two million jobs per year to the national economy.

Of its total, $65 billion will go toward broadband, marking the largest one-time federal investment ever. Another $100 billion will be distributed for transportation projects through competitive grants via the U.S. Department of Transportation. Those will include new programs in road safety, rail and other programs that cities can access.

Advocacy organizations have lauded the bill as a huge win for local governments.

“After years of advocacy, we were proud to stand with President Biden today for the signing of this historic infrastructure legislation on behalf of cities, towns and villages across the country,” said Clarence E. Anthony, CEO and executive director of the National League of Cities. Anthony was in attendance Monday along with several other representatives from the National League of Cities and various other organizations. “Today’s infrastructure bill means transformative investments in transportation, broadband and water are heading to communities of all sizes. As cities rebuild and recover, these funds will increase equity, create safer transportation, build resilient structures and strengthen our economy.”

Along with transportation, broadband and many other infrastructure-related investments, the Clean Water Fund and the Drinking Water State Revolving Fund will each receive $11.7 billion. The Energy Efficiency and Conservation Black Grant will receive $550 million targeting resiliency to harden communities against climate change.

Following a year of hardships inflicted by the ongoing coronavirus pandemic, Kathy Manness, president of the National League of Cities, noted the importance of the bill in helping communities recover. After decades of deferred maintenance, Manness said in a statement the bill “marks a turning point for our nation’s infrastructure, with historic investments going to cities, towns and villages.”

Beyond monetary contributions, the bill will also allow local governments “to issue tax-exempt bonds to finance rural broadband projects; help reduce the cost of commercializing the purchase and installation of carbon capture, utilization, and storage equipment; and increases the current cap of tax-exempt highway or surface freight transfer facility bonds,” according to a brief from the NLC.

Further, the bill has mechanisms built into it to ensure projects are equitably funded and carried out. Under the act, Tribal involvement in federal infrastructure review and permitting will be expanded through better access to permitting timetables and decision makers and a reduced financial burden for project reviews.

In this, The Federal Permitting Improvement Steering Council, which authorizes and oversees large infrastructure projects, is charged under the bill with early engagement of Tribal governments to “identify potential impacts to natural, archeological and cultural resources from federally-authorized infrastructure projects,” a statement from the permitting council says.

Distribution of the money will be overseen by Mitch Landrieu. Landrieu, who was appointed as senior advisor responsible implementation Sunday by Biden, served as mayor of New Orleans between 2010 and 2018, while the city was recovering from Hurricane Katrina. As mayor of New Orleans, Landrieu managed more than 100 projects and secured billions in federal funding for roads, schools, hospitals, parks and critical infrastructure, according to a statement issued by the White House following his appointment. He also served as chair the U.S. Conference of Mayors, an organization that has strongly supported the bipartisan infrastructure bill and was represented at its signing Monday.

“With this law, our nation and its cities can revitalize our infrastructure, strengthen our communities, create good-paying jobs, and make our economy more sustainable, resilient and just,” said Dayton Mayor Nan Whaley, current president of the U.S. Conference of Mayors who was at the signing. “Having fought so hard for this historic, bipartisan legislation, mayors were honored to witness President Joe Biden signing it into law. Cities and mayors are on the front lines of many challenges facing the nation and its families—challenges we can better, more fully, and more quickly address, thanks to this once-in-a-generation package.”

Looking ahead, final details of the bill still need to be hammered out ahead of its rollout. In the meantime, communities seeking more information about applying for grants and accessing funds should contact representatives at organizations such as the National League of Cities, the U.S. Conference of Mayors, the Government Finance Officers Association or the National Association of Counties, among others.