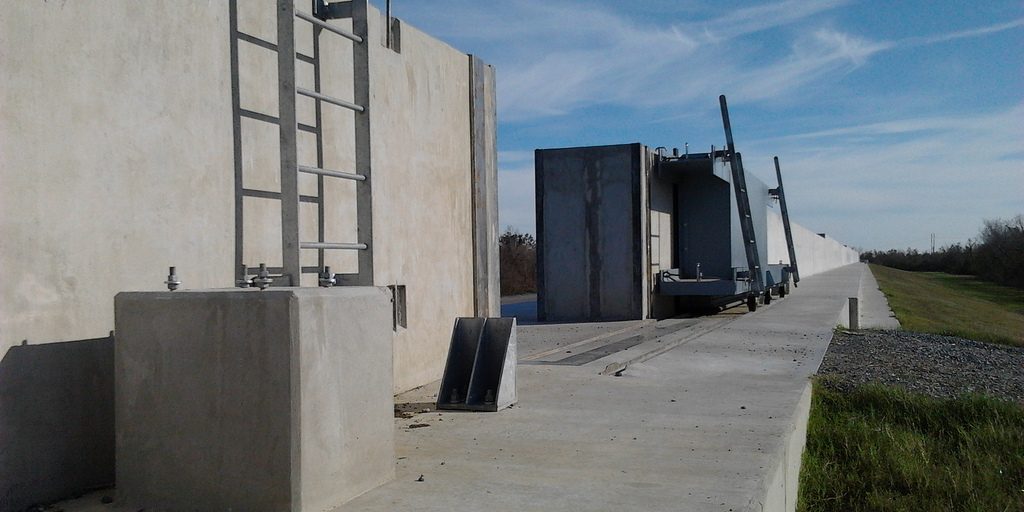 Sixteen years ago, Hurricane Katrina made landfall in New Orleans as a category three storm. While the hurricane didn’t hit the city directly, it lingered in the area for nearly one full day. Within hours, storm surge had breached the city’s levee system at around 50 different points.

Tens of billions of gallons of floodwater poured into the city, submerging 80 percent of its streets.

More than 1,800 people lost their lives and about 100,000 structures were submerged, causing an estimated $125 billion in damages—making it the costliest tropical cyclone on record at the time. (These days, it’s tied with 2017’s Hurricane Harvey.) In the months and years following, much focus was put on upgrades required to prevent a future disaster from happening.

“After the devastation of the 2005 hurricane season, the U.S. embarked on one of the largest civil works projects ever undertaken, at an estimated cost of $14 billion,” reads a study published in 2019 by the Army Corps of Engineers, “The project included restoration, accelerated construction, improvements and enhancements of various risk reduction projects within southeastern Louisiana. … The completion of the levees, floodwalls, gates and pumps that together form the (Hurricane and Storm Damage Risk Reduction System), brought 100-year level of hurricane and storm damage risk reduction.”

The system features the world’s largest pumping station; hundreds of levees positioned in a protective ring around the city; the longest storm surge barrier in the nation; and a floodgate at Lake Ponchartrain. But while the infrastructure improvements—completed in 2018—were designed to protect the city from future catastrophic failures, its function wasn’t certain. Especially given that some of the levees are sinking.

“Southeast Louisiana, including the Greater New Orleans area, is generally characterized by weak soils, general subsidence and the global incidence of sea level rise,” the engineering report notes. This settling might compromise the system’s effectiveness “as early as 2023.”

This weekend, the infrastructure was put to the test.

On Sunday, exactly 16 years to the date when Katrina came ashore, Hurricane Ida barreled into New Orleans as a category four storm. With sustained winds of 155 miles per hour and gusts topping 170, it tied 2020’s Hurricane Laura and the Last Island Hurricane in 1856 as the second most powerful hurricane to impact mainland United States. The system held.

“It did not happen. We did not have another Katrina. And that’s something we should all be grateful for,” said New Orleans Mayor LaToya Cantrell, speaking during a joint after-storm briefing Monday with other city officials. “We held the line—no doubt about that.”

According to Kelli Chandler, regional director of the New Orleans Flood Protection Authority, “the levee system functioned as designed.” In the metropolitan area, “There was no breaching or overtopping of the levee system,” she said.

Statewide, Louisiana Governor John Bel Edwards said  in a statement delivered about 60 miles away Monday that engineers hadn’t found any levees at all in the state that had been “breached or failed. There were a few smaller levees that we believe were overtopped to some degree and for some duration of time and that did result in some people’s homes being flooded, but they did not fail. They overtopped in a few areas,” he said.

But although there wasn’t catastrophic flooding, the storm’s impact “is absolutely significant,” Cantrell said. At least four people have died, according to reports. The government’s response is ongoing and will be for some time.

“No one will be left out. No one has been left out,” Cantrell continued, noting that first responders are going “block by block, neighborhood by neighborhood” conducting wellness checks. Within the metropolitan region, Edwards said more than 25,000 electricians had been deployed to restore power. And in Washington, D.C., President Joe Biden approved a request from the state for a Presidential Major Disaster Declaration because of the storm’s severity, opening up federal assistance and funding sources, according to a press statement.

Ramsey Green, New Orlean’s deputy chief administrative officer for infrastructure, noted “There are, throughout the city, small pockets of standing water. The reason for that is because there is so much debris out there that it is blocking our catch-basins or clogging our subsurface lines.”

Amid the challenges, there are signs that things will get back to normal eventually.