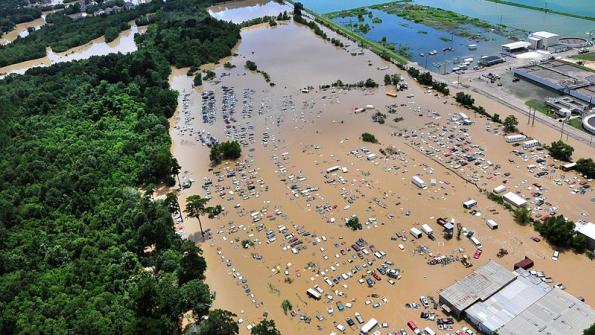 Cities and parishes across Louisiana are beginning recovery efforts to rebuild and give aid to the residents devastated by the massive flooding last week.

As devastating floods in Louisiana continue, affected cities and parishes have begun the necessary recovery efforts to repair damages.

The American Red Cross has called this flood the “worst [disaster] to hit the United States since Superstorm Sandy,” according to CNN. Over 60,000 homes have been damaged, 13 people have died and 20,000 have been rescued from a flood cause by 6.9 trillion gallons of rain that hit the state between Aug. 8 and 14.

One northern Louisiana town has pledged to help Baton Rouge in recovery efforts. Oak Grove, La., officials have partnered with the the Louisiana Annual Council of the United Methodist Church to let the city hall serve as a drop off location for the Church’s flood bucket ministry, The News Star reports. The buckets will be delivered to the Methodist Disaster Relief team in Baton Rouge later this week.

Meanwhile, Lafayette, La., officials have begun doing preliminary damage assessments of their area, according to The Advertiser. Public Works Director Tom Carroll said that the city-parish plans to resume regular trash pickup on Tuesday and that the Lafayette Consolidated Government had set up contracts with debris collector DRC Emergency Services.

"Right now, our focus is to get the preliminary damage assessment done," Carroll told The Advertiser.

Not all localities have been able to secure debris handling contracts as readily as Lafayette. Central, La. Mayor Jr. Shelton has complained about the state government’s rules that govern getting contracts in place with such companies, according to The Advocate.

"The most disappointing part now is dealing with getting debris removal contracts in place," Shelton told The Advocate. "It's a sad sight, and it doesn't help morale. But the [state] government seems to stand in the way of just getting this done by making us go through all this red tape."

In lieu of securing such contracts, the Central City Council has slackened permit fees and ordinances in order to help spur recovery efforts.

Officials from Livingston Parish — which CNN reports received 2.5 feet of water in one day — are preparing to distribute food, water and hygiene products to people throughout the parish, The Advocate reports. The collection sites will be run by the Louisiana National Guard and will likely be set up at public areas like schools and libraries.

The Denham Springs, La. City Council, has already approved spending caps of $4.4 million to remove debris, The Advocate reports. The council even had to meet in the city hall it abandoned in the 1960s, because floodwaters had so badly damaged the current administration building.

In the wake of the massive disaster, many volunteers have taken charge to healing their communities. The Healing Place Church, which has turned its future campus in Denham Springs into a help center, has also praised the local government for being so accommodating of volunteer efforts.

“The mayor and city council have all been so helpful and welcoming,” Campus Pastor Ryan Frith told The Advocate. “They feel like they’re receiving a blessing by us being here, but them opening up to us and allowing us to come in and serve is really a blessing to our volunteers.”

Lafayette has seen similar results in the number of volunteers appearing to help rescue others and clear away debris in the city-parish.

"It's amazing to see," District 9 Councilman William Theriot told The Advertiser. "I have great confidence in the people in that district and all of Lafayette."