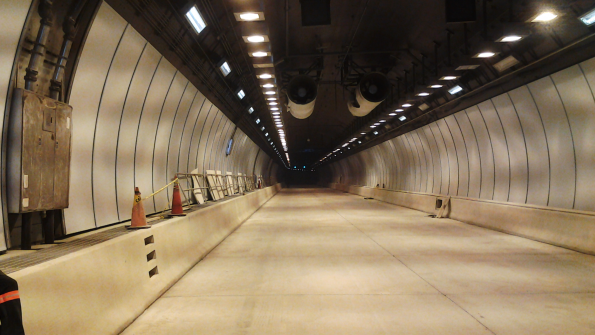 To keep traffic flowing in the new Port Miami Tunnel, operators rely on a series of pumps and sensors to fight off floodwaters.

So far, the plan seems to be working. In its first month, the tunnel averaged nearly half of the Port’s daily traffic of 16,000 vehicles. That number is expected to jump dramatically in the coming years with the expansion of the port and the enlargement of the Panama Canal. The tunnel is ultimately expected to host 26,000 vehicles every day.

The expected growth is important. It was the primary driving force behind the construction of the tunnel, which cost $668 million and took 4 years to complete.

With so much at stake, the success of the tunnel project and operation is essential. To ease the burden on Miami, Miami-Dade County, and the Florida Department of Transportation (FDOT), a deal was struck with a private company to design, finance, build and operate the tunnel. The state and local government organizations selected MAT Concessionaire to manage the project and awarded them a 30-year concession to operate the tunnel.

While the tunnel operators will collect regular payments from the FDOT over the course of the next 30 years, the FDOT will charge the concessionaire anytime the tunnel is closed – at a rate of $115,000 per day.

The tunnel operators are bearing the cost of financing and operating the tunnel – including potential fines for closure – so they are very motivated to keep it open at all times. To do so, a number of critical systems must remain operational. As the tunnel travels 4,200 feet underwater, dipping down to 120 feet below sea level, flooding is a major concern.

While the tunnel itself is sealed, frequent annual storm surges threaten the tunnel and its passengers with flooding. Combating the flood requires a series of pumps that are positioned beneath the road base, in the ballast area of the tunnel.

This area serves as the tunnel’s sump, collecting any water that makes its way in. Each pump room features a number of pumps and a wet well bored into the floor. The wet well serves to hold enough water for the pumps to work efficiently, and to keep the water level well below the road base. They system depends on the pumps working properly at all times, making pump control one of the most critical systems in the tunnel.

To ensure proper and long-lasting automatic operation of the pumps, redundant (primary- and backup-) level sensors were selected from Automation Products Group. APG worked directly with the control system designer to install a combination of submersible pressure transducers and float switches. Together the sensors monitor the water level and trigger the control system to operate the pumps.

A submersible pressure transducer rests at the bottom of the wet well. This sensor measures the water pressure above it to calculate an accurate depth. This is a reliable way to monitor liquid level as few environmental factors can disrupt it. As such, it acts as the primary level sensor.

For a back-up sensor, a series of float switches, is mounted vertically inside the pump rooms just above the floor. These serve to activate/deactivate a control signal based on the position of the float and give the redundant level control needed to protect the system.

Redundancy is an important principle of reliable control system design, ensuring that a single failing sensor cannot interrupt the smooth operation of the pumps. It’s especially important when system failure could cost the tunnel operator $115,000 per day and potentially threaten the lives of tunnel commuters.

The level sensors are just one link in the reliability chain, but are critical because they provide the control signal that activates the pump system. If the sensors fail, so does everything else.

Failure would carry with it a large financial burden and would endanger lives in the underwater tunnel. The control system contractor played a key role in designing a reliable system and in selecting high-quality components to give Florida taxpayers a tunnel that will support the Port of Miami, one of the biggest economic engines in the nation.