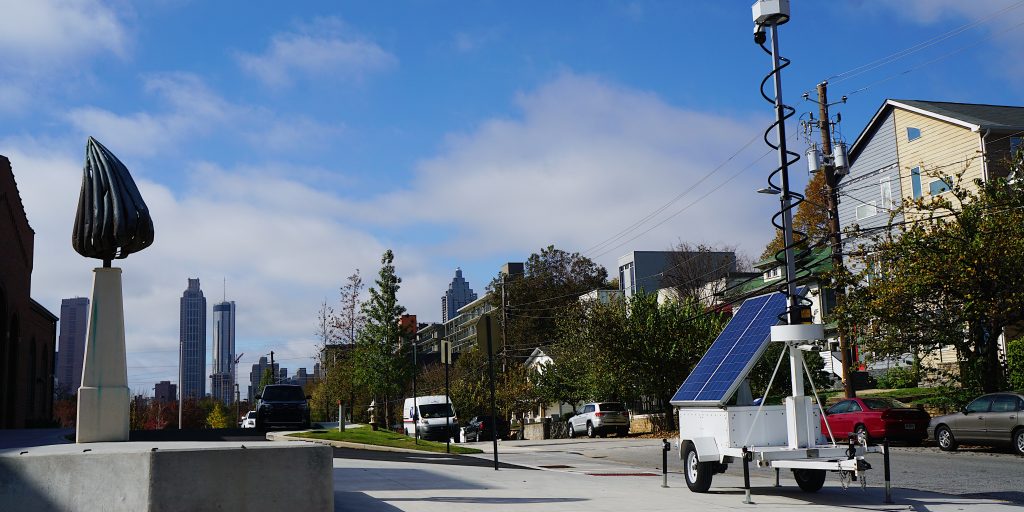 Half a million people call the city of Atlanta home, and approximately 7.3 million people live in the metropolitan area, according to new U.S. Census data. Consistently ranked among the nation’s top five population-growth areas in recent years, the metro Atlanta population is projected to increase by nearly 3 million more people by 2050. As the population continues to soar, it is the responsibility of the nearly 2,000-strong unit of sworn officers of the Atlanta Police Department (APD) to create a safe environment for residents. In response to the city’s unprecedented growth, APD has recognized the need to deter crime by increasing coverage in new or expanding areas throughout the city.

Moreover, during the past year, public safety concerns escalated as a result of COVID-19 restrictions, political unrest and public protests, which compounded the police department’s need for a force multiplier. Looking to augment permanently installed cameras, APD sought a mobile solution that could be deployed for additional and short-term coverage of large, impromptu gatherings or events.

The emergence of mobile surveillance options

APD and its strategic public safety partner, the Atlanta Police Foundation, commissioned the construction of four self-contained, wireless, mobile surveillance trailers for use by APD that can be easily deployed from site-to-site when extra manpower is needed.

The mobile trailers are each 5-feet wide by 13-feet long, and designed to be light and nimble, making them easy to tow from place to place as they’re needed. A 21-foot telescoping mast is affixed to the trailers, and includes:

To enable quick relocation and setup wherever needed, the surveillance trailers feature solar panels and batteries that provide up to five days of continuous operation of the cameras and speaker with no connection to power infrastructure or sunlight. Power is collected via solar panels, stored in the batteries, and managed through the electrical equipment. The security devices are networked in through a switch. Data communication is provided by an LTE router, making the trailers completely wireless.

An extra set of “eyes” for deterrence and evidence

The mobile surveillance trailers can be used as a reactive solution in response to unexpected events or as a proactive tool to deter crime in areas that don’t have adequate coverage from permanently installed cameras.

By leveraging the city’s Video Integration Center (VIC)—a cutting-edge facility that serves as the hub for Atlanta’s Operation Shield program—APD can potentially peer into areas associated within the vicinity of a generated 911 call, an accident or some other event to which they have been alerted, and prioritize response appropriately. Once police receive intelligence on where or when an unexpected event occurs—such as a public protest—they can strategically deploy the mobile surveillance trailers beforehand to de-escalate the situation, mitigate additional crime and collect valuable on-site footage.

They can also be used openly as a deterrent and strategically placed in areas of the city to ensure adequate coverage and visibility when police can’t be on-the-ground. For example, the APD began using the cameras around the city in places where it needed extra eyes, such as stretches of road where “street racing” sometimes occurs. The video footage collected via the mobile surveillance trailers can be transmitted to the VIC and viewed live by operators. The footage provides the APD with valuable insight and forensic evidence to understand the series of events that took place, identify perpetrators, and increase overall situational awareness. In fact, in one recent instance, a shooting occurred during a street racing episode and video footage from one of the trailers provided the evidence for police to make an arrest.

Police departments across the country are short staffed and looking for ways to operate with increased efficiency and safety, and Atlanta is no different. From being the host city of professional sports championship events, to enduring business closures that occurred during the effort to curtail the spread of COVID-19, APD continues to find more uses for its mobile surveillance trailers to aid its mission to keep residents and guest within the city of Atlanta safe and to build trust within the community.

Marshall Freeman, Chief Operating Officer, Atlanta Police Foundation states, “When you’re down a lot of manpower, then what you’re looking for is how can we mobilize tools that are going to give us some of the same things that we would have if we had an officer physically standing there, and obviously the [mobile surveillance trailers] have provided that for us.”