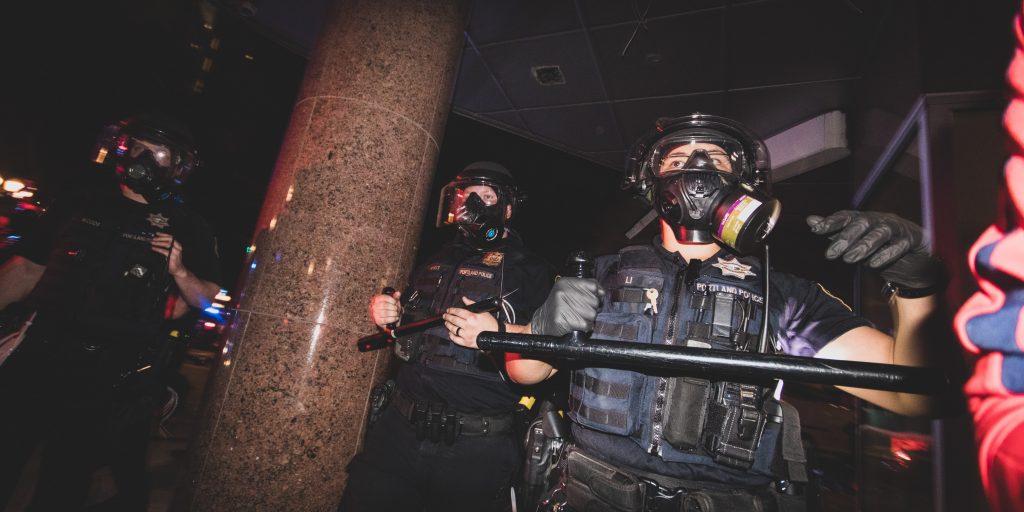 As tensions continue to mount between protesters, law enforcement and federal agents, Portland Mayor Ted Wheeler took to the streets last night in an attempt to ease tensions. He ended up getting tear gassed.

There is nothing to indicate the mayor was the intended target, and the Portland Police Department denies using gas, CNN reports. It stands to reason the gas the mayor experienced was deployed by federal agents protecting the property.

“It stings. It’s hard to breathe. I can tell you with 100 percent honesty I saw nothing that provoked this response,” Wheeler said immediately after, speaking to an on-site New York Times reporter. “I’m not afraid, but I am pissed off.”

President Donald Trump says federal officers were sent to the city to help keep the peace and defend property, however, local leaders are saying their presence is exasperating an already contentious situation.

Videos have emerged of heavily armed troops refusing to identify themselves, grabbing protestors and forcing them into unmarked vehicles, with the Department of Homeland Security confirming the tactics. A local lawyer who was arrested by federal officers in the protests said she was never read her rights, was never given the opportunity to call an attorney and wasn’t informed of the charges against her until she was transferred to the county jail the next day, according to The Oregonian.

Calling the federal troops’ presence a “violent… paramilitary occupation,” City Commissioner Chloe Eudaly introduced legislation to cease any cooperation between local law enforcement and interloping agents. The Portland Mercury reports the city council yesterday unanimously approved the decision. “While there are many elements of this situation beyond city council’s control, we must take every action available to combat violations of those constitutional and human rights of our residents,” the commissioner added.

Wheeler agrees with the move, telling CNN “This is clearly a waste of federal resources and it’s getting increasingly dangerous. “We did not ask the feds to be here. We do not want them here. They’re not helping the situation. They’re not appropriately trained, and we’re demanding that they leave.”

President Trump has vowed to continue to deploy federal troops as part of Operation Legend in cities across the country, with or without the support of local leaders. At various times Trump mentioned Albuquerque, N.M., Kansas City, Chicago, New York and Philadelphia by name. “All run by very liberal Democrats. All run, really, by the radical left,” he said.