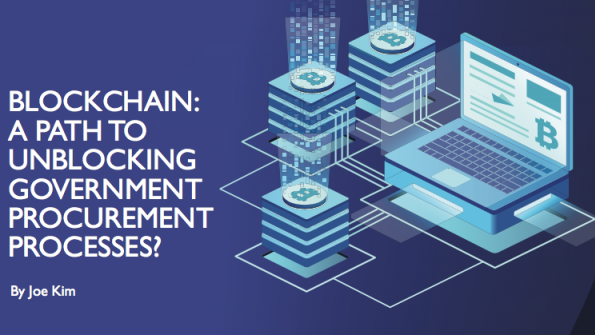 It looks like the United States government may have found an ideal solution to expedite its procurement efforts.

It looks like the United States government may have found an ideal solution to expedite its procurement efforts.

In late 2017, the General Services Administration (GSA) began looking at blockchain, the distributed ledger technology mainly known for bitcoin transactions, to accelerate its FASt Lane contract award process. Currently, that process is designed to help the government award contracts within 34 days, but the GSA believes that blockchain technology could reduce that timeframe significantly.

The hope lies in blockchain’s ability to accelerate verification processes by using a vast number of interconnected peer-based computers (known as “nodes”) to store blocks of information. Blockchain is transparent by design, and that transparency allows data to be shared more easily between parties. Plus, blockchain connects multiple systems and allows them to interact with each other. In short, blockchain creates a mechanism for more effective communication between different points of the procurement processes. In doing so, it can accelerate that process.

Certainly, blockchain has the potential to truly revolutionize the way government agencies acquire services and solutions, just as it has revolutionized the way the world’s banks handle the exchange of currency. But, as the financial world has discovered, network monitoring and management strategies play a critical role in blockchain’s success. They are the supportive technologies that will ultimately help blockchain reach its potential within the government by enabling a strong and reliable end-user experience.

That enablement can be a challenge, due to the distributed nature of blockchain. The success of blockchain as a well-oiled procurement apparatus is dependent on high throughput and low latency. Unfortunately, those goals can be difficult to achieve over such a wide-ranging and heavily taxed network, where each node is under pressure to process every transaction.

It is important for IT professionals to have a means to access and monitor performance information regarding the different nodes that make up their blockchains. A single node experiencing latency issues can undermine the blockchain’s overall performance by inhibiting its ability to deliver data between destination points in a timely manner. Administrators must be able to identify these performance issues and their causes so they can rectify them before they impact the procurement process.

It is also worth noting that, much like the peer-to-peer system that makes blockchain function, many agency networks are themselves highly distributed. On-premises, hosted, and hybrid network infrastructures are the norm. Teams must be able to monitor data as it passes between all of these services to help ensure that their networks are operating efficiently and dependably. They must deploy monitoring strategies that provide unfettered access and visibility into the entirety of the network, wherever it may exist.

Making a hard target even harder to hit

Better visibility also leads to better security. Indeed, despite publicized breaches, blockchain technology has gained a reputation for being highly secure due to its decentralized nature, which makes it a harder target for hackers to hit. But nothing in this world is truly hacker-proof. As such, agencies must still take care to maintain good old-fashioned security hygiene.

Implementing a security and information management system that patrols the network and scans for malicious activity is still extremely important. Continuous, proactive monitoring and encrypting data in transit and at rest must remain a fundamental part of an agency’s security posture.

The fact is that blockchain remains a relatively new technology. As such, there may very well be vulnerabilities that have not yet been exposed. No doubt enterprising hackers are, at this moment, attempting to identify and exploit those vulnerabilities. Maintaining a sound security posture can help agencies fortify themselves against those efforts while taking strides to improve their procurement processes.

Blockchain is an innovative, powerful, and exciting technology that truly does have the capacity to change the way government procurement works. Indeed, it could become the solution that finally enables agencies to accelerate the process of landing and finalizing contractual agreements.

However, it will only succeed if agencies take care to support their blockchain efforts with proper network management strategies. Implementing these strategies can help ensure the security of their networks and effectively take any and all blockages out of their chains.