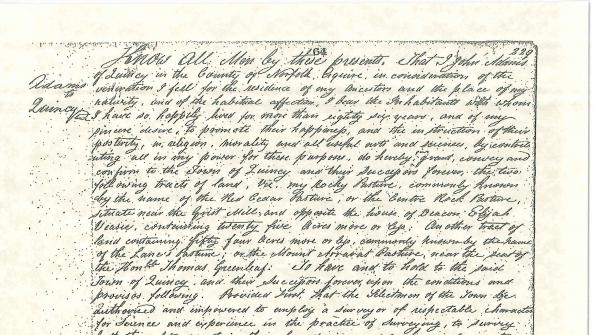 Norfolk County, Mass., and Xerox have embarked on a preservation project to preserve its earliest deeds, which are handwritten. The organizations are preserving over 250,000 handwritten deeds from 1793 to 1900 that will result in nearly 12.5 million lines of information when the project is complete.

In 1793, the Norfolk County, Mass., Registry of Deeds commenced operations. Today, it is one of the oldest registries in the country. The county’s earliest deeds are handwritten, and include historic documents linked to John Hancock, Paul Revere, the second President of the United States John Adams and other colonial founders.

Because the documents are handwritten in English cursive, they are difficult to read and even more of a challenge to digitize. And since cursive writing hasn’t been taught in education institutions for the past 10-12 years, the documents needed to be transcribed and preserved so future generations can view and understand them.

Norfolk County and Xerox have embarked on a preservation project to preserve those documents. The organizations are perusing over 250,000 handwritten deeds from 1793 to 1900 that will result in nearly 12.5 million lines of information when the project is complete.

The transcription project, which began in 2014, is being paid for with a $2 million state technology grant. A team from Xerox is doing the work, which is currently about halfway complete.

The Norfolk County Register of Deeds, William O’Donnell, says he feels a responsibility to be a custodian of this historical collection. He wishes to make the deeds relevant and available to the public. He believes that the transcription process will ensure that the county’s historical records will be correct.

He cautions, however, that while the transcribers do their best, the accuracy of the transcribed documents isn’t guaranteed. That means the handwritten records will be the only ones considered official, O’Donnell says. The end-products of the transcribing are considered “a convenient reference for registry patrons,” he adds.

“One of our early records is from John Adams, second president of the U.S., to John Quincy Adams, sixth president of the U.S. Another Adams deed explained how he wanted a school built to honor John Hancock,” says Norfolk’s Register of Deeds. O’Donnell says the deed describes Hancock as a great benefactor of the nation and outlines some of his beliefs about the school system. “These are the words of one our nation’s first leaders, and now they will be preserved forever for future generations to study and enjoy,” O’Donnell explains..

“Working with Xerox to transcribe these documents, we’re making history come alive for individuals, lawyers, title examiners, and others who are interested in learning more about the county during colonial times.” O’Donnell says.