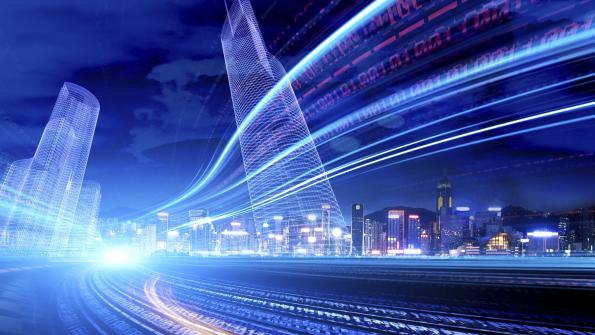 Similar to assets like power, water and sewer, a growing number of local governments are providing broadband as a utility.

Todd Jackson, the chief information officer for Westerville, Ohio, had a dilemma. The city, located in the shadow of Columbus, is in one of the fastest growing regions in the state, but the businesses there were repeatedly requesting higher speeds for Internet connectivity, as were community institutions including the school district, the local university and Otterbein University. With lagging Internet speeds, Westerville was losing its competitive edge.

“What we found is that businesses needed both broadband and data center services that were not available to them,” Jackson says.

“While preparing the business plan and 5-year financial plan for the city council, we recognized we would need to replace or upgrade much of the existing fiber optic and data center infrastructure.”

The question Westerville faced, as do all municipalities dealing with communications infrastructure development, was how the project would be funded?

“All too often, the biggest challenge with any network infrastructure project is securing the appropriate financing,” says Misty Stine executive vice president of business development for eX2 Technology, an Omaha-based company that finances, designs, constructs and maintains intelligent broadband and critical infrastructure networks. “With limited public sector funding coupled by rapidly changing technology, it is easy to understand how a municipality can feel intimidated when considering a communications infrastructure initiative.”

Landmark Dividend is one entrant into the market to provide capital to municipalities building foundational communications infrastructure projects. According to Landmark vice president Steve Peloso, “There are gaps in the capital stack for municipalities. Grants exist but are not guaranteed and bonds are not always an option. Cities and towns don’t always have debt capacity, so the only other option is a public-private partnership.”

There is much evidence that backs the idea that broadband as a utility brings value to a community in tangible, quantifiable ways, and as more municipal problems require technological solutions, investing in broadband is more critical now than ever.

“We recognize the value of fiber as a utility. Much like any other property assets – power, water, sewer – once it goes in, it goes in for a long time,” Peloso continues. “There is a lot of political will behind broadband today. There’s a lot of evidence of the services and value that broadband and fiber makes possible. We think it’s worth investing in.”

A growing chorus has emerged from cities such as Westerville. These cities have access to businesses and end-users that they may not have thought about before. They may not be in the business of being a network services provider, but they do serve the population.

“What has changed is that municipalities have shifted their thinking,” Peloso says. “The value is more than simply saving money from providers. There are other things, including security video, wireless infrastructure, Internet of Things (IoT); all rely on the fiber optic network that underpins it all.”

Additionally, Peloso says that the financing options for participation in the construction or upgrading of a network are more open than they have been in the past. “The economics for municipalities are different; the cost model is different. Some cities that are not served or upgraded by carriers such as Google Fiber or an incumbent carrier have an option now,” he says.

“There’s more to just building it. It is a business, and municipalities have to decide what role they play when the funding comes in,” Peloso says.

“Many public agencies have successfully marketed and leveraged their infrastructure assets to finance all or part of their network infrastructure through public-private partnerships (P3), right-of-way (ROW) development efforts and indefeasible right of use (IRU) agreements. The terms and revenue-share models are customizable to best fit your city’s needs,” Stine adds.

Today, Westerville serves more than 200 businesses with its fiber and data center infrastructure, as well as the city itself.

“We had our own institutional needs, including public safety purposes, the school districts, the university, traffic management, to name a few. Today, we’re positioned very well for IoT, connected vehicles and new services we can offer,” Jackson says. “When you get to point that those with it have a distinct advantage, it’s a utility. Whether it’s Internet, data center or electricity, we know how important those services are to our residents.”

He adds, “The term ‘4th utility’ is accurate. If municipalities look at it, broadband networks as a utility to provide services in order to save money, and you create revenue in other ways, you have a business.”
Circuit Court Ruling: A Setback to Municipal Broadband?

The municipal broadband movement may have been dealt a setback last month by a U.S. Circuit Court of Appeals ruling that upheld what many consider restrictive laws in North Carolina and Tennessee over the growth of municipally-owned broadband networks.

The court agreed that municipal networks were valuable, but it disagreed with the Federal Communications Commission’s (FCC) legal arguments to pre-empt state laws. In all, 20 states currently have laws that restrict municipal broadband efforts.

Telecommunications lawyer Joseph Van Eaton of the law firm Best Best & Krieger explains, “The FCC purported to find authority to pre-empt certain state laws that limited local entry into the telecommunications marketplace. But it did not claim that the law clearly gave it the authority to intrude into state organizations.”

The FCC claimed the law was vague enough that it could be read to give the commission the authority to pre-empt certain state laws. But, according to Van Eaton, “In this case the vagueness of the law is fatal because a clear statement of Congressional intent is required.”

Jeff Gilleran, a telecommunications lawyer formerly with Verizon, says, “The general consensus of the telecom bar, regardless of where one stood on the pros and cons of the statutes, was that the FCC would have a hard time winning this case, and that consensus has proven to be accurate.”

“The decision reads like a good example of judicial restraint.  While it sounds like the court had one view of the merits of the state statutes, it did not impose its policy preferences and instead followed the law on pre-emption,” Gilleran says.

Van Eaton continues, “It is important to recognize that the decision reflects no antipathy toward municipal broadband – it actually goes on at length to explain the benefits of municipal entry into the marketplace.”

Does this mean that cities intent on developing municipal broadband have little protection from restrictive laws? According to Van Eaton, “What it means is that communities that wish to enter the broadband market need to convince their state legislatures that restrictions on municipal broadband are contributing to the slow pace of broadband roll-out – and that the best way to encourage private investment is to allow open entry into the market by public entities, with as few restrictions as possible.”

Robert Wack, City Council President of Westminster, Md., which has developed a municipal fiber network, summarizes the issue: “Certainly one of the first to-do items for any municipality contemplating a broadband project of any kind is to understand their local regulatory environment, which could drastically constrain the range of business models they may have available for consideration.”

Finding atypical ways to unlock your community’s smart city potential can make the difference between a smarter, more connected community and one that gets passed by. The keys to new partnering relationships and financing opportunities may be more accessible now than ever before.

Timothy Downs is the president of SmartGig Media, a business media firm focused on providing information services to cities and communities to develop, design and deploy gigabit broadband, 5G wireless capacity and Internet of Things infrastructure.

This year, American City & County along with Smart Gig Media are hosting the first Smart Gig Chicago conference on November 2 and 3. For more information on the event or to register visit www.smartgigchicago.com