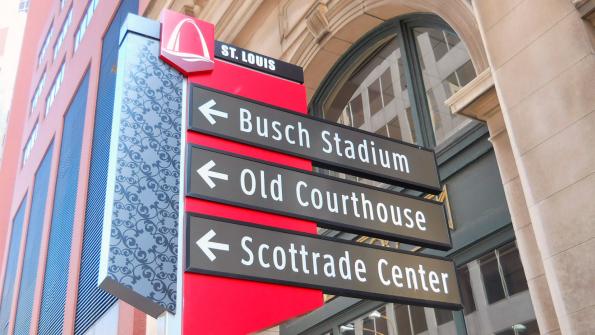 Wayfinding system shows the way in the Show-Me State

Representatives from the Missouri Department of Transportation (MoDOT) and the St. Louis Convention & Visitors Commission (CVC) saw an opportunity when Interstate 64 was reconstructed. Rather than simply replace existing DOT interstate signs, they could create an inclusive utility that connects tourists and residents to attractions and destinations.

Representatives from the Missouri Department of Transportation (MoDOT) and the St. Louis Convention & Visitors Commission (CVC) saw an opportunity when Interstate 64 was reconstructed. Rather than simply replace existing DOT interstate signs, they could create an inclusive utility that connects tourists and residents to attractions and destinations.

Because St. Louis County contains 92 individual communities, each with distinct districts and attractions, a destination-based wayfinding system was considered unmanageable. Instead, the project designer, Traverse City, Mich.-based Corbin Design, developed wayfinding logic consisting of “Attraction Corridors” along which most primary districts and destinations reside. These primary north/south roadways intersect with the east/west highway system that bisects the region. Using these, visitors and residents alike can intuitively connect to diverse destinations: history, culture, shopping, dining and entertainment.

Once off the highways, drivers are directed to a range of primary destinations based on their proximity to the viewer. These destinations appear because they agreed to contribute monies to the wayfinding program. Corbin

Design developed an equitable funding formula that places responsibility on those most able to contribute. So larger, for-profit destinations (such as Busch Stadium) appear prominently throughout the region, while smaller non-profit organizations have an equal opportunity to participate at a lower cost. Any destination, large or small, can now use this logic, directing visitors from throughout the region to their front doors.

“The St. Louis CVC teamed up with members of the local public and private sectors to install more than 250 vehicular and pedestrian wayfinding signs throughout St. Louis city and county,” says Brian Hall, chief marketing officer at the St. Louis CVC. Hall says the signs are instrumental in providing an enhanced experience by assisting visitors in exploring all that St. Louis has to offer. The St. Louis region welcomes more than 22 million visitors each year.

From vehicular signage to pedestrian kiosks, pedestrian directionals and parking identification, visitors to St. Louis are now supported with a wayfinding signage standard that is legible, easy to update and stands out in the environment.

Expanding on the logic of the wayfinding system, the St. Louis CVC commissioned a local design firm to develop a mobile website that allows visitors to plan their trip in advance. The site enables visitors to discover more detailed information about destinations along each Attraction Corridor.