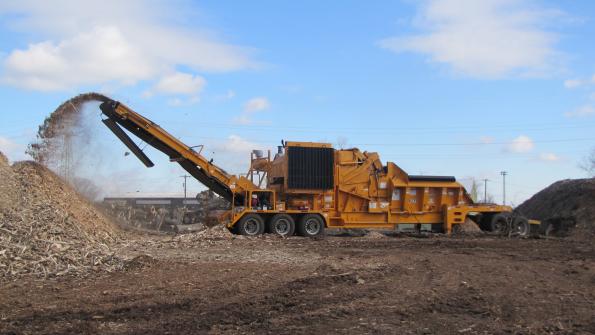 Many cities like Toledo, Ohio, have implemented programs for dealing with municipal waste wood, and for good reason. Normal tree care operations in a sizable municipality can yield a considerable amount of material. Factor in variables such as storm damage cleanup and construction/demolition waste, and urban waste wood becomes a significant issue.

Many cities like Toledo, Ohio, have implemented programs for dealing with municipal waste wood, and for good reason. Normal tree care operations in a sizable municipality can yield a considerable amount of material. Factor in variables such as storm damage cleanup and construction/demolition waste, and urban waste wood becomes a significant issue.

“In the late 1980s we were taking woody material to the landfill,” says Dan Plath, forestry crew leader and woodlot manager for Toledo. “With the laws changing, we needed to shift away from that, so we had to look at other options for dealing with it. Recycling the material into mulch seemed like the most viable option, and actually it turned out to be an inexpensive option, all things considered,” says Plath.

Plath calculates that city yards and woodlots receive on average 100 cubic yards of raw material each day, captured entirely through the city’s own urban forestry operations. Recycling that material creates an abundant supply of mulch for city use, and Toledo also offers mulch for sale to anyone in the area.

With the city’s wood recycling program off to a good start, Toledo officials eventually invested in their own horizontal grinder to create the mulch. They started with one of the early Model 3680 Beast recyclers in the mid-90s and ran it for approximately 10 years. Remus, Mich.-based Bandit Industries manufactures the recyclers.

In 2006, with demand for the city’s mulch increasing and more raw material from the emerald ash borer infestation entering city wood yards, Toledo upgraded to a Model 4680 Beast horizontal grinder with a 1,000-horsepower CAT diesel that the city is still using. The Beast has a 45- by 60-inch mill opening.

The big CAT engine and the machine’s design are well-suited to the city’s recycling operation, says Plath. Yard crews have accumulated approximately 2,000 hours of operation on the Beast since 2006. They are currently running a 1.5-inch diamond screen with shingle fan teeth to make the community’s mulch.

Toledo has turned a potential wood waste nightmare into a solution that not only recycles the material, but also adds a stream of revenue the city can use for reinvestment.