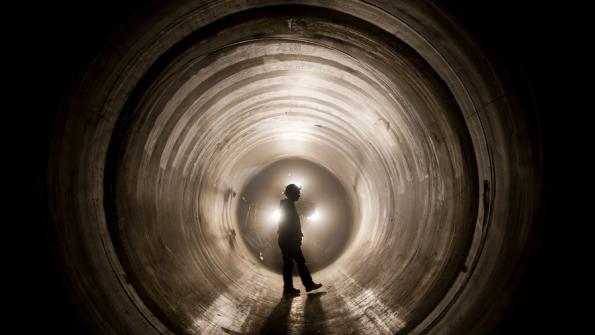 The project’s wrapup signals the completion of the last of three new tunnels able to withstand earthquakes on the Hayward, Calaveras, and San Andreas faults.  Located between the Sunol Valley and Fremont, Calif., the project is part of the commission’s $4.8 billion Water System Improvement Program (WSIP).

“The seismically resilient New Irvington Tunnel is a project that strengthens the backbone of the Hetch Hetchy Regional Water System,” said SFPUC General Manager Harlan L. Kelly, Jr.  “Our successful work investing in the water system will help ensure that we can reasonably protect the health and safety of our Bay Area customers and the economy.”

The 8.5-foot-diameter New Irvington Tunnel was constructed parallel to the existing Irvington Tunnel, which was completed in 1932. A secondary tunnel allows the SFPUC to take either tunnel out of service for maintenance and inspections.

“Our goal is to restore water deliveries within 24 hours after a major earthquake in the Bay Area,” said WSIP Director Daniel L. Wade. “The completion of this tunnel takes us a huge step closer to that critical goal.”

The project has not been without its challenges. With the anticipation of complex geology, the new tunnel was constructed using conventional mining techniques rather than a tunnel-boring machine. The crews mined from four separate headings using road headers and controlled detonation. The miners experienced frequent ground class changes and extreme ranges of rock hardness during construction. In addition, heavy groundwater inflows and “squeezing” ground needed to be addressed along the way. In 2011, CalOSHA reclassified the tunnel as “gassy,” requiring more rigorous measures to monitor for explosive or toxic gas, and enhanced protective measures for worker safety.

Construction began in August 2010, and crews achieved their first ‘hole through,’ where the two tunneling teams met underground, on June 12, 2012. The second hole through on October 8, 2013 marked the completion of tunnel excavation. The new tunnel is now in service.

In the coming weeks, crews will take the existing tunnel out of service for inspection. Meanwhile, the project team will work to restore above-ground facilities around the new tunnel. This above-ground work will last through the fall of 2015. Currently, the Water System Improvement Program, which is comprised of 83 projects, is more than 85 percent complete.

The video describes the Peninsula Pipeline Seismic Upgrade (PPSU) project. It is the last pipeline project to start construction under the Hetch Hetchy Water System Improvement Program. Some of the pipelines that will be replaced in the project were built more than 80 years ago.