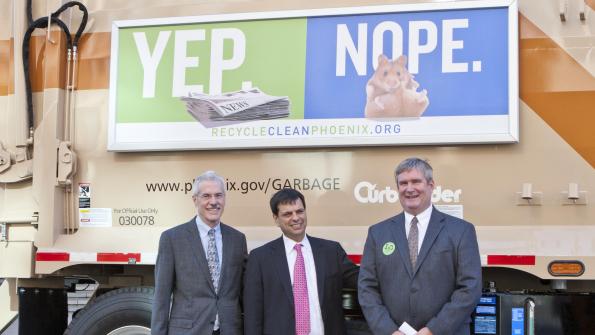 recent national survey commissioned by the National Waste & Recycling Association found one in five Americans, unsure if an item is recyclable, will still place it into a recycling container. Phoenix, Ariz., America’s sixth-largest city, enjoyed active residential recycling participation, but contamination cost the city more than $722,000 in 2009.

“We’ve always known contamination has been an issue and have tried a number of things to put systems and programs in place to reduce that amount,” says John Trujillo, director of public works.

“People enthusiastically participated in Phoenix’s recycling program but didn’t understand the negative impacts of contamination,” says Karen Bandhauer, CVP program director. “We wanted to communicate to residents that recycling was not just another way to dispose of their waste.”

With a directive to “Recycle Cleaner,” the Recycle Clean Phoenix campaign promoted the city’s recycling program and underscored how improper recycling contaminates the waste stream. Phoenix assisted by funding varied marketing, public relations and advertising tactics (including billboards, mailers and cinema and radio ads), as well as a website, www.RecycleCleanPhoenix.org.

Catchy visuals depicted the “yeps and nopes of curbside recycling”— juxtaposing recyclable items with unexpected yet obvious things that do not belong in bins, such as cats and hamsters. Capturing attention with humor, campaign materials drove traffic to the website, which featured lists of recyclable and non-recyclable items.

“The campaign was fun, but it brought awareness of the issue to residents,” Bandhauer says. Though contamination data is difficult to gather, she adds that the campaign was “well executed by the city with longevity, and everyone was very pleased with the bump in tonnage in target areas.”

Tom Waldeck, KPB’s president and CEO, marvels that campaign material is still circulating years later, in outlets including Time magazine, and says Recycle Clean Phoenix served as a precursor to the city’s current Reimagine Phoenix campaign.
“The campaign helped us identify the importance and value of different types of communication,” Trujillo says. “We have a recycling goal of 40 percent by the year 2020, and within the next six months, we’ll have another goal in place on getting beyond that.”