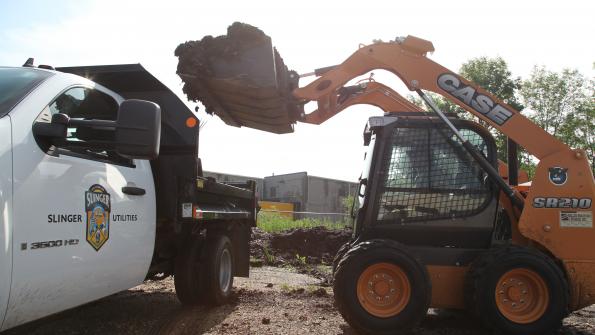 The village of Slinger, Wis., recently added a new skid steer to its fleet: the Tier 4 Final SR210 from CASE Construction Equipment. Greg Moser, who is public works and utilities superintendent for the village, discusses the features of the new equipment.

Municipal work is ultimately a blending of many different trades. It was with this eye on versatility that the village of Slinger, Wis., recently added a new skid steer to its fleet: the Tier 4 Final SR210 from CASE Construction Equipment.

Greg Moser is public works (DPW) and utilities superintendent for the village. He made the case to the village board to add the new equipment. He said three primary factors stood out: the value provided by the versatility of the equipment, the reaction of his operators, and the serviceability of the machine matched with the proximity/responsiveness of his equipment dealer.

That high-flow hydraulic package plays an important role in allowing the village to complete much of the work it faces on a daily basis.

“We own a bucket, forks and a snow pusher, but we rent out stump grinders, millers, jack hammers, anything like that,” says Moser. “Basically anything that [manufacturers] can make for those machines we want to be able to utilize.”

Many of the attachments that Moser rents require as much as 33 gpm of hydraulics. The ability to operate attachments that require a higher flow helps save the village money by bringing work in-house that would otherwise have to be contracted out.

DPW often works on street maintenance projects. “One of the major job duties is street patching, and that plays into a mill planer grinding off that 2 inches of asphalt,” says Moser. “Contracting-out that kind of work is very expensive, so if we have smaller patches, we want to do that in-house when we can, so we really wanted our own machine to be able to do that kind of work.”

The SR210 (photo ar right), at a rated operating capacity of 2,100 pounds, represents one of the most common skid steer size classes in the industry. With this model, CASE built power and performance usually associated with a full-frame model into the footprint of a medium-frame skid steer. That power and reduced size has proven important.

“We don’t have a huge fleet, but the fleet we have has to be as versatile as possible, and this allows for a lot of that,” adds Moser.

In the video, Greg Moser discusses the versatility and lifting capacity of the SR210 skid steer.