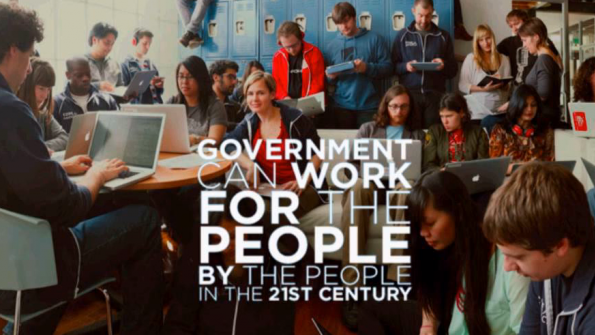 Government in the digital age

In a recent webinar sponsored by Emerging Local Government Leaders, Code for America covered open data programs and the ways local governments are becoming more innovative. Garrett Jacobs, a program coordinator at Code For America, discussed how the tools of engagement are changing, and how these technological advancements are impacting governance.

When tinkering with a technological solution, Jacobs says the public must always be kept in mind. He says an initiative’s design needs to be “for and with people,” meaning that leaders must understand the processes by which people interact and interface with government.

Jacobs said San Francisco’s CalFresh texting program was an example of this design. Last year Code for America worked with the city to improve the delivery of Supplemental Nutrition Assistance Program (SNAP) benefits to low-income residents.

The Code for America team found that an enrollees in CalFresh benefits needed to reapply every six months; however, this reapplication process was complicated and involved numerous physical notices and forms. This paperwork was mailed out, but often never reached the intended recipients, who have no physical address or P.O. box.

The solution was to streamline the process and go paper free. The Code for America team found that through a different program, low-income residents could apply for free cellphones. “More people have cellphones than physical addresses,” said Jacobs. Instead of mailing out physical notices, Code for America developed a text message application to remind individuals it was time to reapply.

What this did was reduce the rate of individuals falling through the cracks of the system. “People are now able to continue to receive the benefits they really need,” said Jacobs, “because we’re meeting them where they are, on the phones, and not through a complicated printed form.”

In creating a tech-based solution, the data used must also be relevant – “not only opening it up and throwing it up on an open data portal, but figuring out how people can actually consume that data and make usable tools for and with government,” Jacobs said.

Louisville, Ky., exemplified this ideal. The city’s criminal justice system was having a difficult time assessing both the prisoner populations at various facilities and the capacities of different corrections programs.

Code for America created a dashboard that took all of this data and displayed it in a clear, visual way. Where judges and clerks would previously have to seek this information out from emails and printed tables, with the dashboard they could actually see how full certain facilities were, or if there was room for an offender in an alternative program.

“It’s taking the data that was already being used internally and making it very decipherable and accessible to the people that need to use it,” said Jacobs.

For more information on open data and technological advancements in local government, listen to the entire webinar here. Note, registration is required.