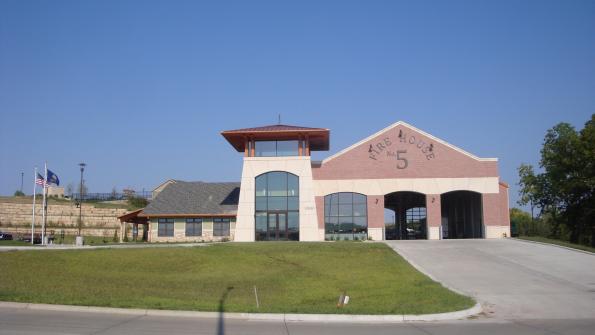 When it came time to build flagship fire station #5 in Manhattan, Kan., city officials and contractors opted for more cost-efficinet prefabricated panels from ACH Foam Technologies. According to Mike Gibson of Murray & Sons Construction, unless you know that ACH’s R-Control structural insulated panels (SIPs) were used to build the fire station, you would have no idea by looking at the finished design that it was constructed with pre-fabricated panels.

Gibson says Manhattan taxpayers save with the SIPs. “You have an entire bank of taxpayers who are saving money over the next 50-year life cycle of this fire station because of the superior energy efficiency of the structural insulated panels,” Gibson says. “Often SIPs are reserved for residential construction. In this case, people were thinking outside the box. Bringing structural insulated panels into the public sphere should make a whole lot of taxpayers happy.”

According to station architect Tracy Anderson, Manhattan wanted its firehouse to represent the city’s commitment to sustainable building. “We knew that SIPs would allow us to create the tightest building envelope possible,” says Anderson. “Also, the alternative nature of structural insulated panels was compatible with the geothermal heating and cooling system that was being installed.

“Moreover, the SIPS opened up the possibility that we could save time on construction. We saved a lot of work on the roof. Because structural insulated panels can span a larger distance, we were able to skip the trusses that would have been necessary in a stick-framed building and use beams that were spaced much wider apart.”

Gibson says that the energy efficiency of a SIPs building spills over to the contractor. “We all know that over the lifespan of a SIPs building, the owner reaps substantial energy savings. What we did not expect was a residual benefit. During the final stages of construction, when the temporary heating and cooling is on our dime, we save money because the envelope is so snug,” he says.