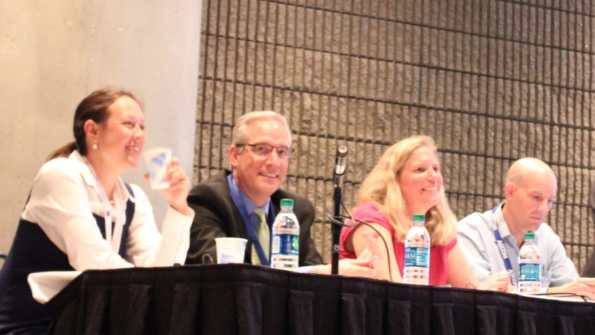 The economic argument to invest in alternative, or active, transportation infrastructure is one city leaders must take seriously if they want to attract the next generation of millennial workers.

Alternative transportation and active transportation modes such as cycling and walking have demonstrated benefits for cities, but in an age of constrained budgets, can the economic argument be made for investing in such infrastructure?

The answer is a resounding yes, according to Jeffrey Miller, of the Alliance for Biking and Walking. Speaking at the American Planning Association’s National Planning Conference on Monday, Miller argued there are both long-term and short-term cost benefits for investing in active transportation.

In the short term, active infrastructure translates to jobs, says Miller. For every $1 million invested in active transportation infrastructure, 8-12 construction jobs are created, according to Miller.

In the long term, the regions through which active transportation infrastructure are constructed see positive economic impacts. “Fort Worth [Texas] saw a 163 percent increase in retail sales in two years along [its] bike lanes,” says Miller.

The Virginia Creeper Trail system, 35 miles of bike lanes winding through the southern part of the state, brings in $1.2 million annually, with a $24 to $38 per visitor, per visit impact on the local economy.

Bicycle tourism is also a growing industry, according to Miller. It is a $400 million industry Oregon, and is responsible for 4,600 jobs.

Caron Whitaker, of the League of American Bicyclists, says city leaders can think about it in terms of economic competition. She breaks it down thusly:

But some city leaders are afraid to get started, according to Whitaker. The thinking is “We’re never going to be Portland, Ore., so why try?” she says.    But Portland built all of its bicycling infrastructure slowly, over 16 years, says Whitaker, and spent only $60 million – about the cost of 1 mile of urban freeway.

So Whitaker posed the question, “What will your legacy be?" Do you want to be the leader who got the ball rolling, creating the next great American cycling city, or the leader that widened a freeway?

To hear questions raised by the audience during the pannel discussion, watch the video below.