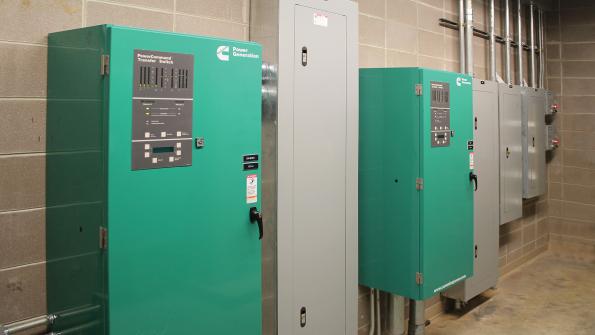 The new remote monitoring system in Woodbury County, Iowa, helps with weekly generator testing and documentation at the 911 center.

When the facility was built in 2008, they installed a 1,000-kilowatt generator and a remote monitoring system from Cummins Power Generation. In 2013, to maintain their accreditation with the Commission on Accreditation for Law Enforcement Agencies (CALEA), they installed a new PowerCommand 550 Remote Monitoring System to conduct and document regular power system testing.

“If we didn’t have electrical backup, we’d have to go to another location and reroute all our 911 calls,” says Glenn Sedivy, 911 communications director at Woodbury County 911 center.

Since the building opened, the generator and remote monitoring system have provided standby power for the Woodbury County facilities. “The generator has served us through several incidents where we lost utility power and had to operate on the standby system for a few hours to up to a full day,” Sedivy says. The emergency power system was funded by a federal grant from the Department of Homeland Security with matching contributions by Woodbury County and the data center operator, Long Lines Communications.

The monitoring system is capable of remotely monitoring up to 12 devices, including generator sets, transfer switches, sensors and output controls, all from one device with an intuitive graphical user interface.

A benefit of the PC 550 is the ease of use in conducting mandatory power system tests required to maintain the Sioux City Police Department’s status as a law enforcement agency accredited by CALEA.

“We can remotely start the generator if we need to. When it’s running, you can actually log into it remotely from a desktop PC and pull out information, such as oil pressure or other data,” Sedivy says.