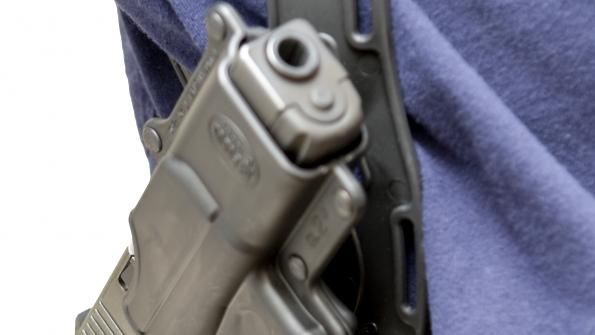 Sanford, Fla., made international headlines after neighborhood watchman George Zimmerman shot and killed an unarmed teenager. In the fallout from the shooting, the police department considered prohibiting the neighborhood watch from being armed, but has since changed its mind.

It was looking like Sanford, Fla., the city where George Zimmerman shot and killed Trayvon Martin, was going to prohibit its Neighborhood Watch from carrying guns, but Police Chief Cecil Smith has since reversed that decision.

Smith announced the formal changes to Sanford’s Neighborhood Watch policies at a Nov. 6 community meeting. Changes included background checks for participants, stronger oversight from the police department and a “strong recommendation” that participants not be armed while patrolling, according to the Los Angeles Times.

"We're not asking anyone to take their second amendment, or their concealed weapons rights away from them," Smith said at the meeting, according to local TV news source WESH Orlando.

A week before the meeting, a spokesman for Smith told Reuters the new rules would explicitly state neighborhood watch members would be prohibited from carrying firearms or perusing individuals they deem suspicious.

"We originally came out with a stern, 'You should not,'" Smith told The Orlando Sentinel. "We took a second look at it."

The proposal upset gun rights advocates, but Smith told paper that pressure from such groups did not sway his decision.

But Sean Caranna, executive director of Florida Carry, a Second-Amendment advocacy group, said even the recommendation for unarmed watchmen is "irresponsible,” according to The Orlando Sentinel.

"What you are doing is asking people to be out in their community, be visible and take note of what's going on," Caranna told the paper. "They can be more of a target for criminal aggression. We certainly don't want the only person to be armed in a confrontation to be a criminal."

However, Smith insisted at the meeting that vigilance and a cellphone are the best crime-fighting weapons, according to WESH. "If you see something, hear something, say something, call us and let us do the job we're paid for," he said.