Palo Alto’s fire chief is defending his department’s use of the county emergency alert system to inform residents of a charity pancake breakfast.

Palo Alto’s fire chief is sticking up for his department’s use of the county emergency alert system to inform residents of a charity pancake breakfast. About 27,000 residents received text message alerts from the county about the event last weekend. 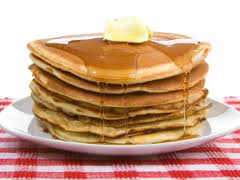 Fire Chief Eric Nickel said AlertSCC, the countywide system, was used properly, and that the fire department’s text message was not a violation.

The reason for the alert, says the chief, was to inform nearby residents that the event included a life-flight helicopter landing at a nearby school, something that has prompted 9-1-1 calls in the past.

However, because the message started with “Pancake Breakfast,” about 10 residents complained that it was a misuse of the county’s alert system.

As part of the pancake benefit, the Stanford Life Flight helicopter was to take part in a rescue simulation involving the Jaws of Life. Chief Nickel was concerned that residents might flood the city’s emergency dispatch center when they saw the rescue chopper.

Erica Schroeder believes the department needs to re-think its notification policy. In her Greenmeadow neighborhood, residents received two phone calls, a text and an email about the pancake breakfast on the Friday before the event.

“I really appreciate Palo Alto’s use of technology to speed urgent communications and community alerts about missing children, etc. Text and automated calls are very useful ways to rapidly communicate. But blanketing us with communications about a pancake breakfast is not only distracting, it undercuts the value of (the emergency notification system),” Schroeder wrote in an email to the Palo Alto Daily News.

“Palo Alto police/fire needs to use better judgment about what is urgent information Palo Alto residents need to know, and what is marketing.”

The Palo Alto fire department’s messaging effort seemed to work. The city did not receive any 911 calls about the helicopter’s touchdown. In addition, the pancake breakfast drew a record crowd that included several dignitaries.

Here’s the message that prompted the complaints:

This is a message from the Palo Alto Fire Department. Palo Alto firefighters will be hosting a community pancake breakfast benefiting Project Safety Net this Saturday, Oct. 12, from 9 a.m. to 1 p.m. at Rinconada Park, located at 777 Embarcadero Road. The event will include a simulated automobile rescue using the Jaws of Life and a live landing of Life Flight’s helicopter. For additional information, please find us on Facebook and Twitter or visit Project Safety Net at www.psnpaloalto.com — the message stated.