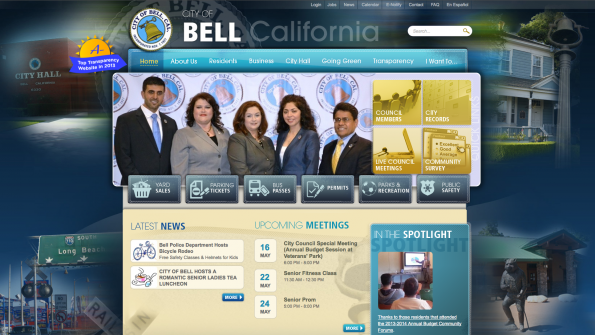 What does Twitter have to do with a town hall meeting? According to communications specialists for municipal governments, more than you would think.

Social media may not be the primary force behind local governments in the digital age, but it does apply to transparency, one of three concepts cities and counties should strive for with web presence. Through increased transparency, many cities are reaping the results of increased communication and functionality.

Local governments’ transparency on the web is becoming critically important, according to Magdalena Prado, senior management analyst for Bell, Calif. Prado, along with the Bell City Council, recently unveiled Bell’s new website, which focuses on being as forthcoming with information as possible.

In July 2010, Bell made international headlines when the Los Angeles Times broke the story of local officials’ mismanagement of funds, with city leaders paying themselves exorbitant salaries. The officials involved were removed and prosecuted, thus allowing Prado and other like-minded officials to usher in a new era for Bell.

The first step, Prado said, was through the web. The previous website had little useful information, and the information that was available was difficult to find. Bell’s new site includes records of every municipal financial transaction, all current contracts available for bidding, and a complete list of government employees and salaries. “This is all information that should already be available to the public,” Prado said.

The website was then re-organized, with homepage-featured links to the information citizens search for most frequently. Also added was a translation function, which, Prado feels, makes the site more accessible to Bell’s largely bilingual community.

“Government reform doesn’t happen overnight, but we’re on a forward path,” Prado said. She was proud that Bell’s new website earned an A- rating from the Sunshine Review, a third party government transparency ranking service. This is up from the previous site’s D ranking.

Web transparency can help the credibility of local governments, and transparent sites offer the additional benefit of direct communication and increased functionality.

A transparent site fosters communication. A site known for its interactive aspects is the Emerging Local Government Leaders forum (ELGL). Founded by Kent Wyatt, management analyst for Tigard, Ore., the site offers blogs, awards, webinars and social media outlets to promote the interconnectivity of governments and communities. These ties are an important function of a government’s web presence, Wyatt said.

“The ELGL engages government officials with the community through proactive communication,” Wyatt said.

Two examples of interactive programs offered by the ELGL are the “Knope of the Week Award” and the Resume Book outreach effort.

In a nod to the NBC sitcom Parks and Recreation, the Knope of the Week recognizes public or private officials who go “above and beyond,” according to Wyatt. Nominated by ELGL members, notable recipients have included Mark Zusman, editor of the alt-weekly Willamette Week, and the leaders of Hillsboro, Ore., for establishing the Hillsboro Hops minor league baseball team.

The ELGL’s Resume Book is another web-based outreach program. Inspired by the “Who’s Who in America” books and programs like it, Wyatt said the program, which collects resumes to connect professionals with more than 100 governmental entities and partners, is growing. It now includes recruiting firms, cities, counties, state agencies and special districts.

As a complement to the Resume Book, the ELGL issued the “Five Minute Challenge.” “We challenged members to contact someone in the book,” Wyatt explained, “to keep communication flowing” between government agencies and emerging professionals. “This could be for networking, to speak about job opportunities or just to offer advice,” he said.

Also imperative to web transparency is functionality, according to Blake Phelps, marketing and communications director of Gulf Shores, Ala. In the wake of the 2006 Deepwater Horizon oil spill, the city underwent a rebranding effort.

“Small Town, Big Beach” was the image the town wanted to promote, according to Grant Brown, public information officer for Gulf Shores. And, as with the case in Bell, international attentionwas focused on the town after the disaster. “We wanted people to see what we looked like, who we were and how we were moving forward,” Brown said.

To draw people to the new site, it had to serve a function. “We aren’t Facebook; people aren’t coming to the site to hang out,” Phelps said. “Functionality is essential. People are coming for a service, they are coming to complete a task.”

The home page includes a “How Do I” drop down menu with links to common citizen inquiries and a “Notify Me” button, where residents can sign up to receive text and/or email notifications regarding beach conditions, emergency alerts, meeting dates as well as job openings.

“If there is no functionality to the site, no one will come,” Phelps explained.

On the previous site, visitors had to find the department they needed to call, wait on hold, and get transferred. Often those visitors would give up before an issue was solved. With the new site, Brown said there is accountability for both citizens and the government, with digital records of all requests made.

Additionally, visitors can now report municipal issues such as potholes, graffiti and code violations. “These issues now go directly where they need to,” Brown said.

Lengths of stay have gone up from the previous site’s 54 seconds to the new site’s 2 minutes 8 seconds. While the one-minute addition might not seem like a lot, to Phelps, it speaks volumes. He feels this number means people are finding what they are looking for, and spending time with the website’s content.

To put it succinctly, “In order to be a leader,” Brown said, “Your web presence is vital.”