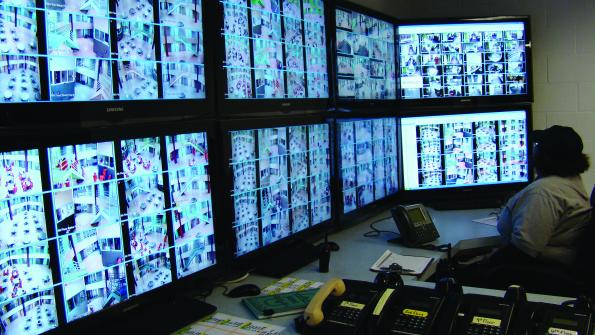 The largest police department in the state, the Oklahoma County Sheriff’s Office (OCSO) provides law enforcement, custodial, and court-related services to more than 706,000 citizens in 15 cities.

Sheriff John Whetsel decided to use his interest in advanced technologies to explore options to enhance police service and facility safety. After the previous analog- based system was unable to effectively monitor the OCSO facility, Whetsel deployed the Avigilon high-definition surveillance system at the detention center to better protect inmates and staff, boost investigative success to ensure inmate accountability and reduce the incidence of false liability claims.

Officers and administrators at the center manage the system using a control center network video management software with high-definition stream management technology. The OCSO installed 138 HD cameras, ranging from one to five megapixels, throughout the four cell pods per floor. The OCSO also installed four analog video encoders to improve the performance of the existing cameras and store up to 90 days of continuous footage. A rotating staff of 20 officers monitor the system around-the-clock from the central control room.

The system was easy for the OCSO to install and integrate into its existing network and the user-friendly software reduced the time required to train staff. The OCSO can now cost-effectively meet the Department of Justice mandate for improved security and achieve a significant return on investment. The OCSO has also benefited from a considerable reduction in internal investigation times, which have been cut from days to seconds. To date, the OSCO says it has saved $10 million.

One of the greatest advantages of the system is that it delivers effective evidence to help the OCSO resolve conflicts at the detention center. With clear footage in hand, the OCSO can respond more quickly to incidents at the detention center and resolve conflicts before they become too serious, improving the overall safety of both inmates and staff.