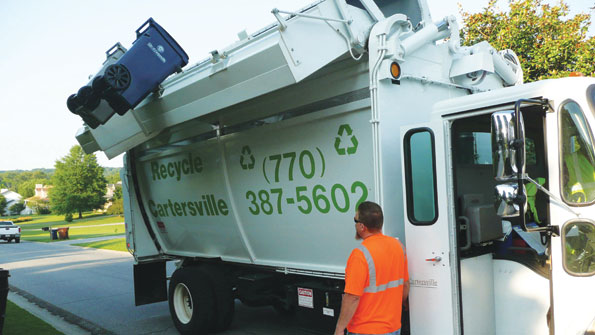 For years, residents of Cartersville, Ga., had to go out of their way to recycle. With no curbside recycling program, their only option was to take their recyclables to satellite drop-off sites run by Bartow County. City officials had considered adding curbside recycling to their services, but couldn't justify the added expense in a weak economy.

Last year, riding a groundswell of support from residents and elected officials, Cartersville Public Works Director Bobby Elliott proposed raising the residential and commercial refuse collection fee by $2 per month to fund a residential recycling program. With careful planning, the fee increase was enough to buy a dedicated recycling truck and containers, pay collection staff and launch the program in February 2012.

Purchasing the appropriate collection vehicle was crucial to the program's success. Most importantly, Elliott wanted a truck with dual stand-up drive and dual side loading. The configuration allows the operator to drive from the right or left side of the cab and to step in and out to load materials on either side of the street. Other requirements included a truck that could handle dual-stream collection, a standard chassis with readily available parts, and a vehicle that didn't compact its load so that no one had to sort through broken glass. Elliott decided on an MP8000/M2-106 dual stand-up drive COMBO multi-purpose collection truck from Fontaine Modification, Fyda Freightliner and GSP Marketing.

Elliott believes that using dual stand-up drive is the most efficient method for semi-automated collection. "Efficiency is key in a fee-based collection system," he says. "You have to dial it in as tightly as you can to minimize costs to your residents."

Elliott also set up two recycling collection routes that operate every weekday, with collection on alternating weeks. A single operator runs the route by himself six of the 10 days, collecting from both sides of the street; he uses a helper the other four days. Elliott rearranged personnel assignments to dedicate an existing employee to the recycling route with no added expense. The recycling program pays half the salary of the helper, who collects yard waste when he is not working the recycling route.

The program has been successful, easily reaching its goal of 1,500 participants. Elliott says he has received numerous phone calls, e-mails and cards thanking the city for adding curbside recycling.