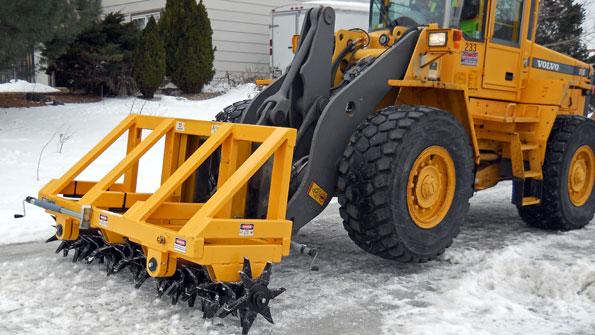 With the snow and ice season in full swing last January, Castle Rock, Colo., faced a daunting problem. Every significant winter snowfall was followed by melting during the day and refreezing at night, which created a buildup of thick ice on roadways and shaded curbs. The Streets Division struggled to provide safe mobility on high-volume streets, and resident complaints in residential areas were on the rise. Limited personnel and equipment added to the problem.

The staff found that sanding materials were ineffective, and loaders and graders faced potential damage because they were not designed to tackle thick road ice. Dave Frost, Streets Superintendent, began looking for alternatives. His research led him to look for a mechanical ice removal method that would break up the ice with less environmental impact than chemical methods alone.

Based on Frost’s research, the town purchased the Arctic Shark, made by Loveland, Colo.-based Ultramech, in February. The Arctic Shark is a rolling mechanical ice-breaking attachment for wheel loaders and motor graders. The Streets Division found that it would break apart the ice with only a few passes, and then crews could plow the resulting ice rubble out of the way. “It worked very well on the places where the road and curb areas are flat, causing ice dams and buildup from day-melt and night-freeze cycles,” Frost says.

When crews needed to use granular chemical deicer to eliminate icy patches, they would pock-mark the ice with the Arctic Shark before applying the deicer. That allowed the granules to penetrate deep into the ice and accelerated ice removal with far fewer chemicals.

As a result of using the equipment, Frost reported a dramatic increase in ice removal. In January, before the attachment purchase, the Streets Division cleared 4.9 lane miles of ice using six operators and six pieces of equipment. In February, using the device, the division posted 39.5 lane miles of ice control using three operators and three pieces of equipment. The February monthly report showed that the new method of ice removal was eight times more efficient than the previous month. “The unit essentially paid for itself in approximately one month’s use, just in cost savings and productivity,” Frost says.

In addition to completing assigned ice removal duties, the town also eliminated a backlog of approximately 108 ice complaints from residents. In fact, a Castle Rock resident attended the February town council meeting to complement the town on what a good job of ice removal they were doing with “that menacing-looking ice thing.”