See how these 7 communities reduced their energy use: 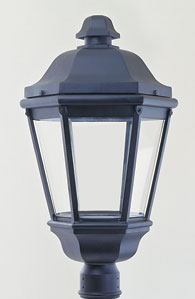 When Estes Park, Colo., officials decided to replace the city’s cantilever style lighting, they let residents vote on their favorite fixture. Public Works officials wanted the luminaires to be dark-sky friendly to comply with the town lighting ordinance, feature high-performance optical systems that use advanced metal halide technology, and be inexpensive to maintain. 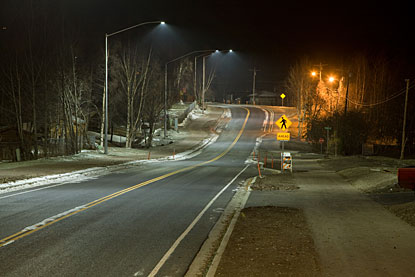 Anchorage is spending $2.2 million to retrofit all 16,000 municipal roadway lights in the city with high-efficiency LED fixtures. The first of the units were installed in November, and the first phase of 4,200 streetlights will be complete by the summer. The LEDway fixtures from Sturtevant, Wis.-based BetaLED are expected to use 50 percent less energy than the city’s current streetlights, and could save $360,000 annually at current energy prices.

Mayor Mark Begich says the city studied the new lighting technologies to validate the energy and maintenance cost savings, and the city held a lighting conference and public survey in March that showed residents overwhelmingly approve of the new white LED lighting. 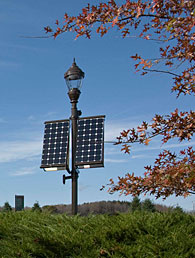 Contained in one of four hamlets in Liberty Township, N.Y., Swan Lake Park is one of the first of its kind in the country to use solar-powered LED lighting technology for commercial outdoor applications. The new lighting was part of a beautification project promoted by the Liberty Community Development Corp., which is funded by the local government, as well as the locally based Gerry Foundation. The effort also was part of a solar street light demonstration project co-funded by the New York State Energy Research and Development Authority.

Six 14-foot-tall, solar-powered LED streetlights installed along a pathway at Swan Lake Park were supplied by Framingham, Mass.-based SolarOne Solutions. The fixtures use round strings of small LEDs powered by photovoltaic cells. A computer regulates the system to ensure that the lights are always on.

Glendale, Ariz., recently established a goal to significantly reduce its streetlight outages. The city was receiving about 20 calls a day from residents reporting outages, and officials estimated that approximately 7 percent of the 18,500 streetlights were inoperable. With the help of a wireless monitoring system from Granville, Ohio-based Roam, the city diagnosed the streetlight malfunctions.

Glendale determined the outage rate, originally estimated at 7 percent, was actually 20 percent. In the first five months, the city reduced its streetlight outages from 3,700 to 370 lights and reduced the call volume from its residents by 85 percent. Today, Glendale is maintaining a 1 percent outage rate, which is driving down operational costs while insuring lighting efficiency. 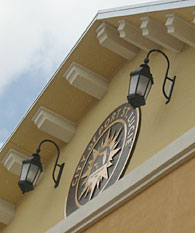 Because the Port St. Lucie Civic Center also serves as an emergency shelter, the building needed its new egress lighting to be powered with a generator. County officials chose fixtures from Roselle, Ill.-based Sternberg Lighting, which illuminates with a 175-watt metal halide bulb. However, the specifications had to be changed to twin 60-watt fluorescent bulbs to accommodate the emergency power generator requirement.

As part of the city’s sustainability plan, Beaumont, Calif., officials determined they could save energy by replacing outdoor lighting. Two types of technologies were defined because each performs better at different mounting heights. LED lights designed by Burlington, Ontario-based King Luminaire, mounted at 16 feet, were used to light the downtown area. A total of 160 of the 78-watt LED lights are being installed, replacing 100-watt, high-pressure sodium fixtures and reducing the annual cost of operation by about 30 percent.

The city also is using 150-watt digital induction lights mounted between 30 feet and 36 feet to illuminate major roadways. Eighty of the lights will replace 200-watt, high-pressure sodium bulbs, initially saving the city 40 percent annually on energy bills. Beaumont is considering retrofitting all of its 2,000 streetlights in the next few years. 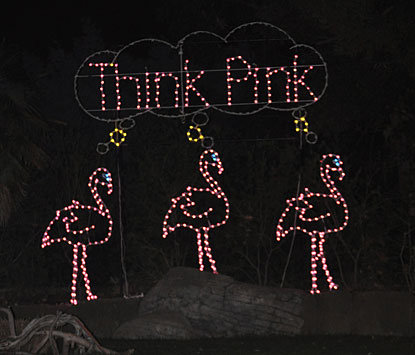 A holiday tradition returns to California’s Oakland Zoo this year, but with a twist that is helping reduce energy costs. Zoo Lights, featuring larger-than-life light displays that resemble the zoo’s full-time animal residents, uses hundreds of thousands of lights. To conserve energy, the Oakland Zoo and Sacramento, Calif.-based Pacific Gas & Electric (PG&E) conducted an energy audit to find where improvements could be made. PG&E worked with Aurora, Ohio-based TCP to replace all of the incandescent holiday lights with LEDs, lowering the watts of electricity required from 250,000 to 52,000 per year.

In addition to the Zoo Lights exhibit, PG&E and TCP are retrofitting other zoo facilities and a nearby amusement park using compact fluorescent, cold cathode and LED lights. As part of the city’s “Greening of Oakland” initiative, the projects are estimated to reduce more than 80,000 kilowatt hours of electricity and more than 125,000 pounds of carbon dioxide emissions.