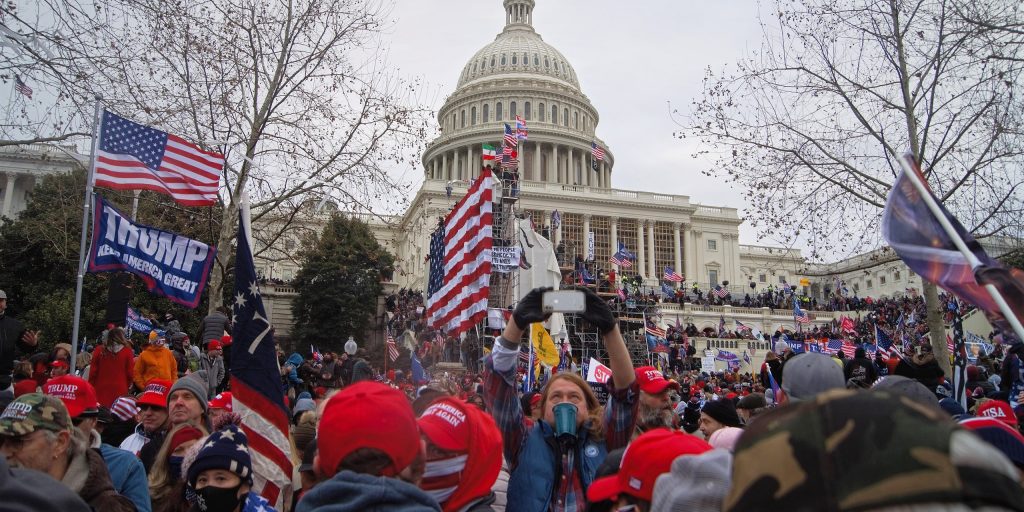 The memory of watching an unruly mob of thousands swarm through broken-down barriers, assaulting police officers and breaking into the U.S. Capitol building can’t easily be shaken. One year ago, for the first time in modern history, America’s political seat was assaulted from within.

And beyond the visible signs, the very foundation of America was shaken.

The indelible mark of Jan. 6, 2021 has been seared onto a generation. Before the attack, democracy—the hallmark of Americanism—was considered by most to be an unshakeable pillar holding aloft those values we hold most dearly: life, liberty for all and the pursuit of happiness.

Yet, one year later, a deepening chasm runs through public discourse, and the insurrection is described differently depending on which side of the aisle is talking. This discrepancy is a painful reminder of what’s been lost. There was a time, not too long ago, when neighbors of opposing viewpoints could cordially debate any number of topics. Then, when the doors of town hall closed and the lights flicked off, they returned to their homes as friends—willing to again shoulder each other’s burdens.

Now, even small-town school committee meetings have turned into political battlegrounds. An ideological war has been declared and skirmishes are waged in every forum that’s available.

Meanwhile, many at the highest echelons of power haven’t yet acknowledged the wound inflicted that day on the rule of law. Senators delivering remarks Thursday on the attack’s anniversary spoke to a mostly empty chamber—the vast majority of Republican senators were not in the audience.

Caught in the middle of this political quagmire, local officials have borne the brunt of the public’s simmering angst for the last year, fielding angry phone calls at home, experiencing cyberbullying online, facing physical assaults at public meetings and even receiving death threats.

Name calling and vitriolic action, previously limited to the anonymous cover of hotheaded comment threads, has tumbled into the national spotlight.

A report from the National League of Cities (NLC) published at the end of last year found that “87 percent of local officials surveyed observed an increase in attacks on public officials in recent years while 81 percent reported having experienced harassment, threats and violence themselves.”

Those who contributed to the report include a mayor whose home was vandalized, a councilmember who received hundreds of emails and threatening phone calls, and an assemblymember subjected to homophobic remarks and death threats—a game camera, used for hunting, was mounted on a tree outside their house.

Local officials are the visible face of government and interface most often with residents. More than their opinions, elected leaders represent the American system of governance. And that representation must be protected and respected by everyone, regardless of political affiliation.

Clarence E. Anthony, CEO and executive director of the NLC, noted “The shameful events of the January 6th insurrection serve as a strong reminder that while Americans may disagree on many issues, we must agree that violence against our elected leaders at any level should not be tolerated. Otherwise, we are endangering the lives and well-being of our fellow Americans along with the future of our democracy.”

While highly visible, managing a community isn’t glamorous, requiring an extraordinary amount of self-sacrifice and behind-the-scenes commitment. It is not an easy task in the best of times, let alone under the pressure of a society at its boiling point.

As a new year begins, administrators across the United States are returning to their offices and picking up agendas in service to their constituents, as they always have. In this endeavor, they deserve support, respect and appreciation.

Political violence directed at elected leaders is unacceptable in every case and must never become the norm.