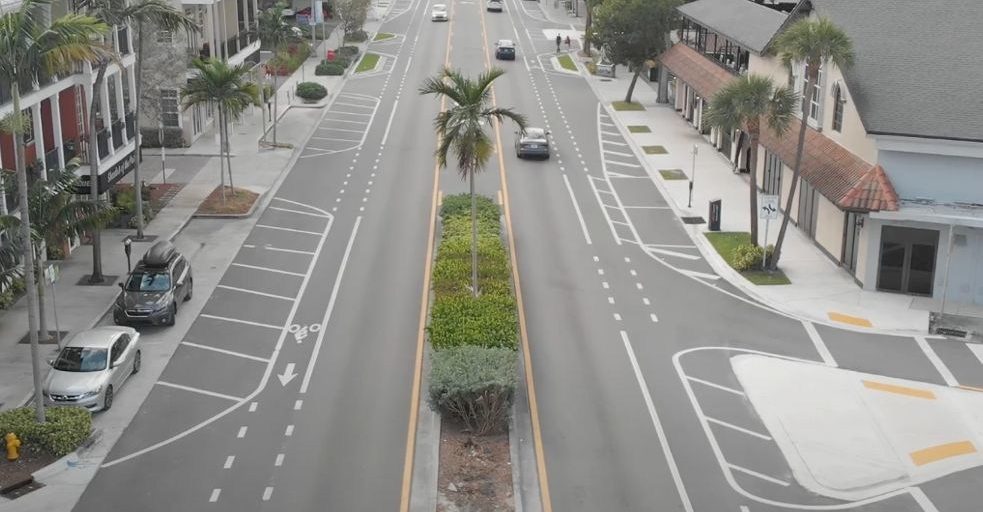 From long-life pavement markings on rural roads in North Carolina to dynamic speed feedback signs installed in a Wisconsin community that’s frequented by walkers, each of the seven projects highlighted in the latest biannual National Roadway Safety Awards announced Wednesday is unique, but their collective goal is the same—reduce roadway fatalities.

Data from the National Highway Traffic Safety Administration and Federal Highway Administration, which jointly put together the awards, “show that 38,680 people died nationwide in traffic crashes in 2020, despite a 13.2 percent decrease in vehicle miles traveled due to the pandemic,” notes a statement issued from the Roadway Safety Foundation and the Broward Metropolitan Planning Organization (Broward MPO) in Washington, which was recognized through an award for its Complete Streets Master Plan and Wilton Drive improvements. “Fatalities increased 7.2 percent from 2019 to the highest number since 2007. An estimated one-third of U.S. highway fatalities are related to deficient roadway conditions.”

Between 2010 and 2019, Broward County, Wash., recorded 1,675 pedestrian fatalities, the single highest number for the statistic in the United States. To make its streets safer, the planning organization developed a comprehensive plan, especially focusing on Wilton Drive, “a bustling stretch of roadway that chronically suffered a higher-than-average number of crashes, particularly those involving pedestrians and cyclists.”

Working with the city of Wilton Manor and other stakeholders, the statement explains, the Broward MPO eliminated a vehicle travel lane in each direction along Wilton Drive, installed buffer bicycle lanes, center crossing medians, widened the sidewalks and upgraded lighting and other improvements.

Since the updates were completed, “Wilton Drive saw a 66 percent decrease in bicycle and pedestrian crashes and a 75 percent reduction in severe-injury and fatal crashes, as well as a 30 to 50 percent improvement in corridor travel times during peak hours,” the statement says.

Given the success of the project along Wilton Drive, Broward MPO is currently moving ahead with 20 similar improvement projects from the Complete Streets Masterplan.

“We are proud to be recognized for the important work we consistently do to improve safety and impact the quality of life for local residents,” said Greg Stuart, the planning organization’s executive director.

Elsewhere, the Florida Department of Transportation was recognized in the most recent round of awards for its research on arterial work zone safety. In conjunction with the Center of Urban Transportation Research at the University of South Florida and the Florida Work Zone Safety Coalition, the department tested different work zone safety scenarios—including iClone, a system that can feed information to the Waze driving app, and the Active Work Zone Awareness Device. The awareness device, a brief from the National Highway Safety Association explains, “is a relatively low-cost countermeasure that consists of a radar device with LED signs mounted on a trailer that warns approaching drivers of an active work zone, notifies them of their travel speed, and contains regulatory messaging.”

In North Carolina, lane departures comprise “55 percent of fatal and serious injury crashes in the state,” a brief from the Roadway Safety Foundation about the awards says. Following a period of research that found that all types of adequate markings reduce crashes, the North Carolina Department of Transportation installed long-life pavement markings along two-lane roadways in rural parts of the state.

“Bellevue’s video analytics program takes a proactive approach to identify safety improvements by leveraging its extensive traffic camera network to study near-crash conflicts and identify potential countermeasures. This greatly reduces the amount of time required to identify safety hot spots and to evaluate possible remedies—often from a matter of years to a matter of days,” notes a subsequent statement from the Roadway Safety Association.

The California Department of Transportation was recognized for updates to its Strategic Highway Safety Plan, which were made to address an uptick in roadway fatalities between 2010 and 2018. The plan includes four principles, “integrate equity, implement a safe system approach, double down on what works and accelerate advanced technology.” It focuses on high priority areas and, among other things, calls for crash statistic evaluation against the plan’s strategies to see if implementations are working.

And the Texas Transportation Commission was recognized for its scoring tools, developed in collaboration with the Texas A&M Transportation Institute, which evaluate geometric, traffic control and roadside design elements on safety.

First presented in 1999, the National Roadway Safety Awards recognize roadway safety achievements that move the nation toward zero deaths and serious injuries on U.S. roadways, the statement from the Roadway Safety Foundation and Broward County notes. The program honors outstanding projects involving infrastructure, operational or program-related innovations and evaluates projects on three criteria: effectiveness, innovation and efficient use of resources. The winning entries were selected from a nationwide pool of applicants by an expert panel of judges from a variety of disciplines.

For complete details on past winners and for more information on the national awards program, visit safety.fhwa.dot.gov/roadwaysafetyawards.