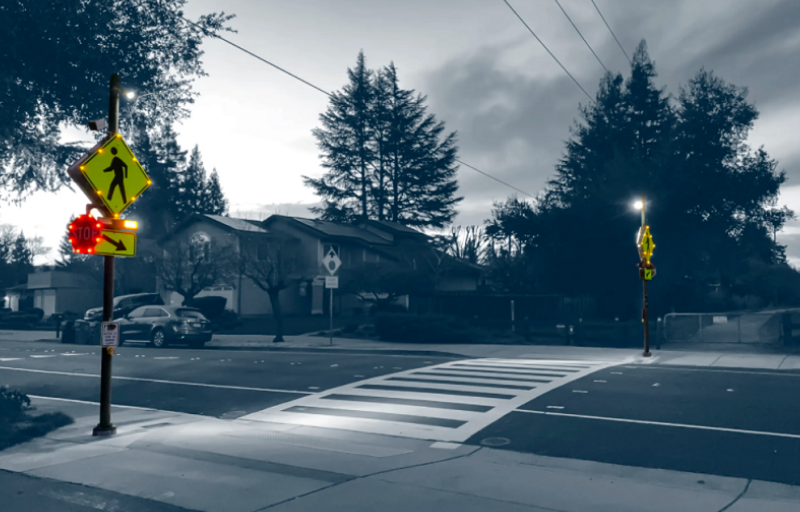 Stretching for 32 miles north to south in California’s East Bay Area, the Iron Horse Regional Trail is always a hive of activity, with an estimated one million annual visits.

In Danville, a one-mile stretch of the trail intersects with three residential roads, requiring pedestrians, bicyclists and even horse riders to interact with the thousands of drivers traveling to and from the nearby schools and business parks each day.

Unfortunately, the existing safety measures at these three trail crossings were no longer sufficient. The rectangular rapid-flashing beacon (RRFB) systems that flashed to alert drivers of non-motorized road users were around 15 years old, from various manufacturers and no longer compliant with government regulations.

Given how frequently some bicyclists were blowing through stop signs around the clock, this lack of visibility was especially dangerous.

Clearly, Danville needed a major safety upgrade that fit each trail crossing’s unique configuration without being too intrusive in the residential areas.

Let There Be Light

Invented by TAPCO, the illuminator includes a flood light that illuminates the approach area of the crosswalk and a beam light that projects outward, illuminating the middle of the crosswalk. It seemed like the best enhancement to an RRFB system at the trail crossings, solving the nighttime visibility issue once and for all.

To minimize the sudden contrast between darkness and light, it even includes a feature that makes the lights fade on and off.

“We were very interested in [the illuminator] because of the visibility concerns we have, especially in the fall when it starts getting darker earlier,” Andrew said. “So, Majid worked with TAPCO’s local rep here, German [Paniagua], on getting the product. German’s awesome, and he’s been so helpful.”

Crucially, the SafeWalk® Crosswalk Illuminator meets and exceeds the 20 LUX minimum recommendation from the Federal Highway Administration’s report on mid-block crosswalk lighting. In addition, it has a weather-resistant enclosure and includes adjustable brackets to allow for precise light focus — ideal for slanted, non-linear and other crossings.

It was just the safety enhancement Majid and Andrew were searching for.

Bringing It All Together

Danville chose to pair the illuminator with a TAPCO RRFB Pedestrian Crosswalk System at each trail crossing, upgrading the existing RRFBs to double-sided, IA-21-compliant units. According to a Florida study on the impact of RRFBs on driver yield rates, RRFBs are proven to increase yielding by as much as 90 percent.

Because they are large and utilize the wig-wag plus simultaneous (WW+S) flash pattern outlined by Interim Approval 21 (IA-21), TAPCO RRFBs are highly visible in all weather and light conditions.

However, while the illuminators and RRFB systems would improve safety for all, Majid and Andrew sought a third solution targeted at getting bicyclists to more frequently comply with the stop sign at each trail crossing. This would reduce one of Danville’s highest collision types: broadside collisions, also known as T-bone collisions.

They landed on the TAPCO BlinkerStop® Flashing LED Stop Sign, a product they had been interested in for years, according to Andrew. Each BlinkerStop® Sign features eight red LEDs embedded into the sign face. Edge-lit and engineered to capture drivers’ attention, it flashes in accordance with MUTCD section 2A.07.

All three solutions leverage passive activation – with infrared bollards placed on either side of the crosswalk entrances – and user actuation via a push button. Having redundant activation methods adds an extra layer of safety. For power, the solutions use AC in some locations and solar in others, depending on what worked best for each area.

“TAPCO integrates all these solutions seamlessly together,” Andrew added, “and that was exactly what we were looking for.”

Rather than operating 24/7, all three solutions only come on when activated, which prevents drivers from getting so used to them that they are no longer noticed. It also keeps the lights from becoming a nuisance in the residential neighborhoods where they are deployed.

There were many reasons Majid and Andrew chose TAPCO as the solution provider for the project, two of which were industry experience and price.

“It’s a small industry, so the jurisdictions here all talk to each other about how products are performing,” Andrew said. “TAPCO seemed to really have been tried and true over the years, and they had [the illuminator]. We had tried several different companies in the past and, frankly, from a price competition standpoint, TAPCO was the best.”

TAPCO’s ability to provide all three solutions was also important because Majid and Andrew wanted to work with one vendor on the entire project. Plus, procurement was simple due to TAPCO’s relationship with OMNIA Partners, Public Sector, the country’s largest and most experienced cooperative purchasing organization for public sector procurement.

They are a trusted resource for government agencies nationwide, enabling the agencies to purchase equally from vetted vendors regardless of size. On top of a faster, smoother procurement process, agencies also get competitive pricing and free freight at no annual cost.

“In the traffic industry, it’s no secret that most traffic engineers and transportation planners know the product they want,” Andrew explained. “You research it. You do your due diligence. So, the [TAPCO and OMNIA Partners, Public Sector] partnership really streamlines the process and allows you to get the product you researched. You know what you’re getting and don’t have to rely on a low bid for a product.”

When the time came to install the SafeWalk® Crosswalk Illuminator, RRFB Pedestrian Crosswalk Systems and BlinkerStop® Signs, local technicians performed the work at the three trail crossings. At one location, the technicians were concerned the illuminator’s flood light would shine into nearby homes, so they elected to face the light slightly more downward, which the product’s adjustable bracket easily allowed.

Over a year later, Majid and Andrew say they have not experienced any issues with the systems, and feedback from the community has been positive. The only problem they have had, according to Majid, is Danville residents asking for these safety solutions to be installed at other locations.

“Even at the time of installation, we had people coming up to us and saying they were really happy we were doing this, especially the bicyclists,” he added. “We probably will install the illuminator at other locations.”

Pedestrians, bicyclists and horse riders of all ages now have added security and peace of mind when using the Iron Horse Regional trail. When they reach a trail crossing, they know there are advanced, unintrusive lighting solutions there to protect them day and night — and they do not even have to push a button.

According to Andrew, “I’d definitely recommend these products to other agencies. They’re really a win-win for everyone.”

For years, TAPCO has partnered with OMNIA Partners, Public Sector to make traffic safety product procurement better than ever. Available through OMNIA Partners, participants have access to over 18,000 TAPCO products, from cones to barricades to delineators and more.