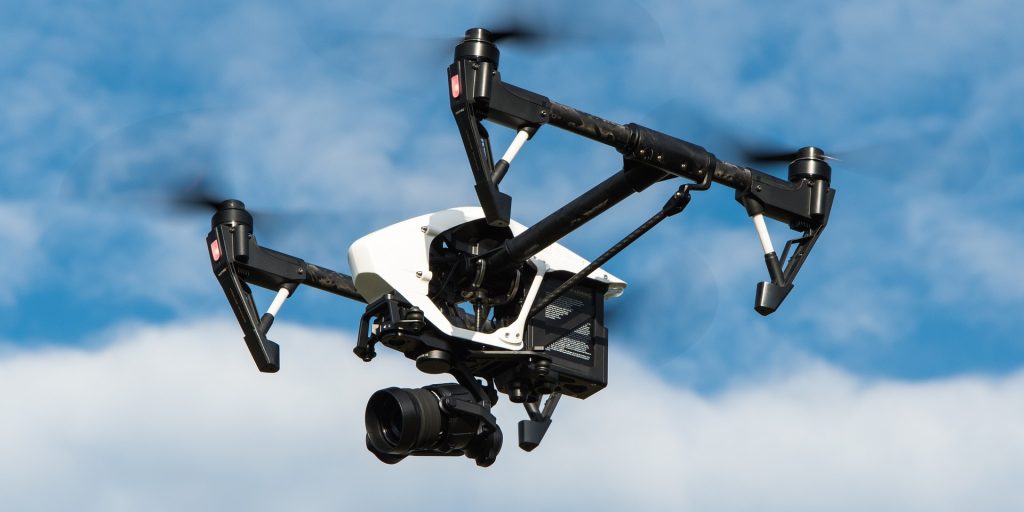 With recent advancements, local governments can benefit from drone technology

Sometimes, the present day can feel like a live-action retelling of “The Flintstones.” Other times, it’s more like “The Jetsons”—with the Rosie the robot tidying up and futuristic aircraft zipping around Orbit City. When it comes to drone technology, it feels like the latter.

Local governments should take notice, as their application for municipal use is sweeping and profound.

“These things have enormous potential to improve the lives of (people in) small rural towns,” said Gary O’Neill, senior aerospace and defense specialist at the Georgia Center of Innovation. He also serves as a senior research engineer with the Georgia Tech School of Aerospace Engineering and Georgia Tech Research Institute.

From drones that aid firefighters to those used by law enforcement officers and others that help rescue crews survey storm damage, unmanned aerial systems (UAS) are already being deployed by local governments across the United States. Recreationally and commercially, they’ve gained a lot of popularity over the last five years or so—a trend that’s only going to continue in coming decades.

“The technology is getting better, smaller and cheaper—when we first started doing this about eight years ago, it was a toy to most people,” said Matt Sloane, founder of Skyfire, a company that helps organizations stand up and manage drone programs. “A lot of places, you can use it in place of a responder who is putting their life in danger. We’re not saying it’s going to replace a firefighter on the ground, but it can help them get” up-to-date information.

According to a 2020 report from San Jose State University’s Mineta Transportation Institute, the drone industry is “projected to grow from its current market value of $2 billion to more than $17 billion by 2024.” A number of drone services currently in development will be a driving factor in the industry’s expansion.

In the short term, O’Neill pointed to delivery services as one service that’s going to become a reality sooner than later.

Delivery-by-drone “hasn’t yet reached maturity, but it’s coming. As soon as the technical details of keeping track of where the drones are and (ensuring) they’re not running into things is worked out, that market will materialize,” he said, predicting that corporations will start offering drone delivery within two to three years. “Like every new idea, there will be a lot of people who jump into it. Many will succeed and a few will fail.”

For local governments and healthcare networks, especially, this advancement will allow supplies like important documents and medication to be delivered quickly from one office or hospital to another—a practice that officially launched last November in North Carolina under a program created by the Federal Aviation Association called BEYOND.

“Drones are going to be an increasingly important part of our transportation system and we need to make sure our state and our country are ready for them,” said North Carolina’s Transportation Secretary Eric Boyette in a statement issued when the program was launched. “The tremendous advancements we’ve seen over these past few years laid the groundwork for safe and integrated drone usage, and we’re excited to continue this important work into the future.”

In a pilot program trialed throughout North Carolina leading up to the program’s launch, drones delivered medical supplies at WakeMed Hospital in Raleigh, Novant Health near Charlotte, Wake Forest Baptist Health in Winston-Salem, and Vidant Healthplex in Wilson.

They were used to document road conditions following Hurricane Florence and deliver goods from a Walmart in Fayetteville. The country’s inaugural “routine commercial drone delivery service” was established and the first public demonstration of a passenger drone flight in North America was successfully carried out—a glimpse into the future.

“The original idea was urban, point to point, perhaps from the suburbs to midtown, for commuting,” O’Neill said. “But it’s morphed to a regional network, where you’re flying from Athens to Atlanta, instead of being on 85 with all those people. You can leave from Athens, cruise at 100 knots and get to Atlanta in 30 minutes.”

Passenger drones “will provide substantial benefit to U.S. industry and the public,” reads an explanation from NASA’s AAM Mission Integration Office, which was created last year to help foster the development of AAM regional networks throughout the nation. Passenger drones will one day drive “an air transportation system that moves people and cargo between places previously not served or underserved by aviation—local, regional, intraregional, urban.”

While these services will probably at first come at a reasonably high cost, like any new technology, O’Neill says the price point will come down as more infrastructure is built.

“The very first aircraft that are going to do this advanced air mobility expect to be certified by the FAA in about three years. And as soon as they’re certified they’re going to want to start operations,” O’Neill said.

For now, at least one technological hurdle holding back drones both large and small is their range.

“There are only a couple of drones available that have any sort of range more than five to 10 miles. When you talk about sending out a drone 40 or 50 miles,” it’s not possible, O’Neill said, noting that using drones to connect rural areas with necessary supplies is of particular interest to governments. “The thing that everyone is chasing is better energy density. The batteries they have are good, but a flight typically can only last 20 or 30 minutes. Doubling or tripling a (battery) unit’s weight is what everyone is trying to do.” And besides lithium batteries, “There’s a lot of work being done to shift from lithium ion batteries to things like hydrogen fuel cells.”

Connectivity is also a problem that hasn’t yet been completely solved. Right now, the FAA requires drone operators to be able to see their drone at all times. While the technology to fly a drone without seeing it via camera or to automate its flightpath is available, it requires a constant connection to some sort of a network.

But if a drone suddenly loses its cellular link, “that could be a bad thing,” O’Neill said, noting the FAA is “trying to make sure that technology is robust enough, because safety is paramount.”

According to Sloane, increased autonomy will also make drones more useful for government organizations. In his experience working with public safety organizations, “A lot of times, the drone is an afterthought, so it’s not getting used as much as it could be,” he said, noting that departments with tight staffing can’t afford to have someone flying a drone.

Along with automation, “There’s going to be a lot better software coming that helps” consolidate data so first responders can get “actionable intelligence,” Sloane said.

Meanwhile, as drone technology continues to advance, O’Neill encouraged municipal leaders to look into what drones can do for their communities.

“You get what you pay for,” O’Neill said. “A lot of communities are settling in at a price point between $10,000 and $20,000, which sounds like a lot of money, but when you talk about preventing injuries to firemen or finding people, cost isn’t an issue.”