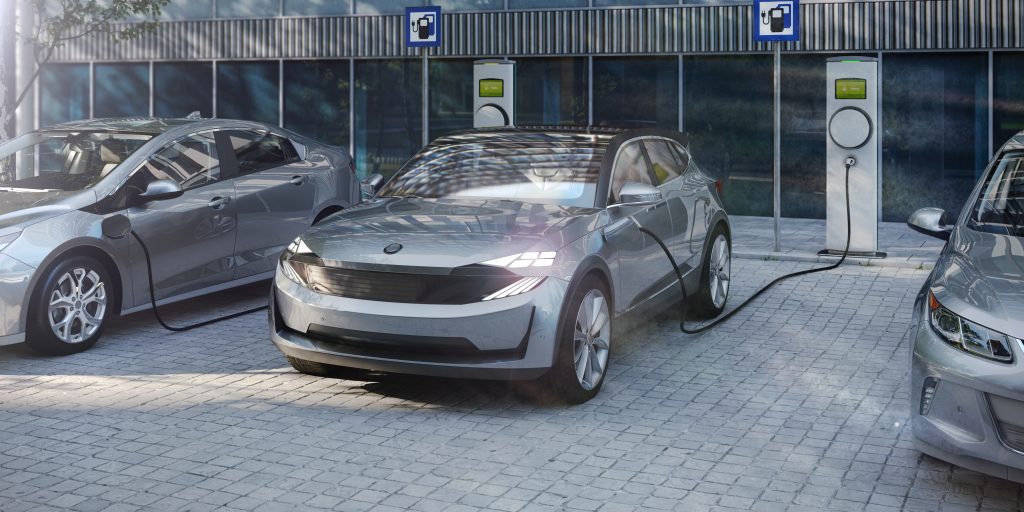 Electric vehicles (EVs) are the future in transportation, as the world turns toward ways of combating climate change. Car manufacturers are in turn increasing their offerings of EVs for the general public. General Motors (GM) notably announced in January 2021 that it would be phasing out petroleum-powered cars and trucks with a goal of selling only vehicles with zero tailpipe emission by 2035. “General Motors is joining governments and companies around the globe working to establish a safer, greener and better world,” GM Chairman and Chief Executive Mary T. Barra said in a statement.

EV charging stations within the United States has grown from 6,900 chargers in 2012 to approximately 61,000 by the end of 2017 for all vehicles, according to the American Society of Civil Engineers (ASCE)’s 2021 Report Card for America’s Infrastructure.

Soon after taking office, President Joe Biden signed an executive order directing the federal government to purchase all-electric vehicles. He is also pushing for the construction of 500,000 EV charging stations by the end of 2030.

The Collaborative works to leverage the buying power of Climate Mayors cities to reduce the costs of EVs and charging infrastructure for all U.S. cities, counties, courts, school districts, state governments and public universities, thereby accelerating fleet transitions. The cooperative procurement process can leverage the aggregated buying power of organizations spread across many jurisdictions, retains the competitive selection process and reduces the personnel burdens on issuing one’s own request for proposal (RFP).

When using cooperative procurement, one governmental agency would use a contract issued by another to have access to the same vehicles and pricing. In the Collaborative, Sourcewell functions as the central organization and has facilitated competitive solicitations, reviewed bids and awarded contracts. This mechanism has the added benefit of providing fleets with multiple vendors to choose from to ensure each fleet gets a product and an experience that fits their needs. The Collaborative also provides training, best practices, educational resources and analysis support, creating a one-stop shop to support EV transitions for public fleets.

The first city to take advantage of the Collaborative’s services is Binghamton, N.Y. (population, 50,000), which purchased two Nissan LEAF vehicles through its membership to replace two 20-year-old gas-powered cars. The LEAFs are used by city officials for zone and code enforcement visits within city limits.

Binghamton Deputy Mayor Jared Kraham touted the benefits of getting the vehicles through the Collaborative. “Always in government, sometimes the hardest thing is the procurement process, so we typically look toward national collaboratives, national purchasing groups or state bids that can streamline the process. That was certainly the case here,” he says. “It also saved us money, being part of the Collaborative.”

It saved time, too. “It’s important in local government to have as little red tape as possible,” Kraham explains. “So, what the clean fleets initiative has done is to provide not only Binghamton, but every local government, a way to procure these things without going through local bidding processes, etc.”

The city is also using the Collaborative for its EV charging stations.

“We’re also building out our infrastructure of EV charging stations to support not just the city’s fleet, but also the growth of electric vehicles in the city,” Kraham says. “When we built a new parking garage, we included a number of electric charging stations there. We built out some stations in [the city]. We view that as part of it as well. It’s not just the vehicles, it’s also the infrastructure.”

According to the Collaborative, plug-in EVs can be charged using standard outlets (110V), which is called Level 1 charging. They can also be charged at Level 2 stations (240V), or at DC Fast Charge stations (480V). Level 1 charging will charge a vehicle completely in eight to 17 hours, depending on the size of the battery in the vehicle. At a Level 2 station, most vehicles will be fully charged in four to 10 hours. High-energy consuming appliances, such as clothes dryers, use outlets with this voltage. Level 3 (or DC Fast Charge) stations can charge a fully depleted Nissan LEAF to 80 percent capacity in 15 to 30 minutes.

Since Binghamton’s EVs are just for daytime tasks, this allows for nighttime charging. Kraham does not see the EVs as a drain on the city’s power grid.

Being a member city of Climate Mayors and the Collaborative has enabled Binghamton to forward its clean energy goals. It was named a certified Clean Energy Community by the New York State Energy Research and Development Authority (NYSERDA) in 2017 after converting all city street lights to LED, and in 2020, it replaced the roof on City Hall with a green roof.

“We’ve done a number of substantial projects that are good for the taxpayers and good for the environment,” Kraham says. “We’ve been pursing state grants and were named the first Clean Energy Community in the Southern Tier, as a city, which has allowed us to have a clean energy grant matching program as part of our award, so we’re able to leverage more than $600,000 in private investment in clean energy initiatives.”

As it moves to replace aging vehicles in the city’s fleet, Kraham says that officials would definitely be looking toward EVs. With just the two EVs currently, the city has seen substantial savings in annual fuel and maintenance costs.

“They perform great, and the staff likes driving them,” Kraham says. “And again, going around the city in a zero-emission vehicle, it’s good for the residents to know that these vehicles are in use in their neighborhoods and across the city.”

This article originally appeared in the Q1 issue of Government Procurement.