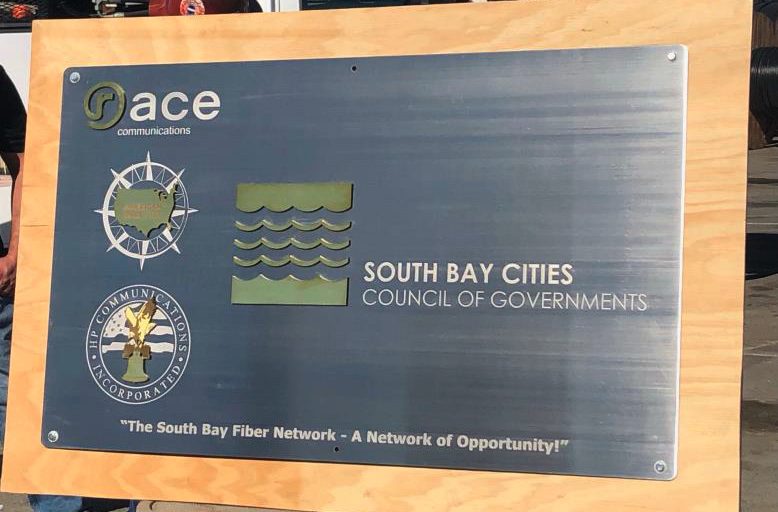 In 2016, a major employer in Los Angeles County’s South Bay region relocated, due to inferior yet expensive network services. At the time, South Bay cities realized they were paying too much for too little Internet service — continuing with that level of service would hinder future opportunities and hinder smart cities applications.

The South Bay Workforce Investment Board (SBWIB) saw this as an economic development issue, and it partnered with SBCCOG and Los Angeles County Supervisor Mark Ridley-Thomas to create a roadmap for SBCCOG member cities to work together on building a high-speed broadband network. Compared to then-current options, such a network would yield higher internet quality, speeds and capacity for lower prices.

That network ultimately became SBFN, which is a dedicated, scalable, municipal fiber optic network that is used by SBCCOG, its member agencies and other public agencies, including SBWIB and multiple Los Angeles County departments.

“This SBCCOG led initiative and investment into critical broadband infrastructure will bring next-generation technology to LA County’s South Bay, allowing us to serve all our residents better by connecting municipal facilities to reliable, secure, high-speed, and low-cost broadband while improving their quality of life on so many levels,” SBCCOG Past Chair and Redondo Beach Councilmember Christian Horvath said.

Funding proved to be an innovative part of this project, as member cities couldn’t collectively afford the capital needed to build the network. So, SBCCOG identified multiple transportation projects that could be implanted by using a high-speed broadband network. Based on this reasoning, SBCCOG applied for subregional funding from an LA County transportation sales tax, which LA  County’s Metropolitan Transit Authority administered.

SBCCOG positioned the network as a means for using smart streets and signals and telecommuting to relieve congestion. About $6.9 million in funding was approved, which covered the capital construction costs. This feat proves that municipal broadband could be considered a transportation construction project.

Construction of the SBFN began in spring 2020. By late summer 2020, the core network ring was completed and operational, in addition to initial laterals to some city halls. All 37 lateral connections are expected to be finished by spring 2021. SBFN service starts at 1GB speed for $1,000 per month and currently goes up to 10 GB speed for $2,750 per month. As SBFN expands its sites though, monthly recurring cost for membership will decrease.

So far, SBCCOG has convened a working group to explore and develop several applications of the network beyond IT capacity. Those applications include improved traffic management, vehicle-to-vehicle and vehicle-to-network communications, accelerating the transition to telework, enhancing online services, telehealth, building out individual city broadband networks and greenhouse gas reduction.