Photo by Jezael Melgoza on Unsplash 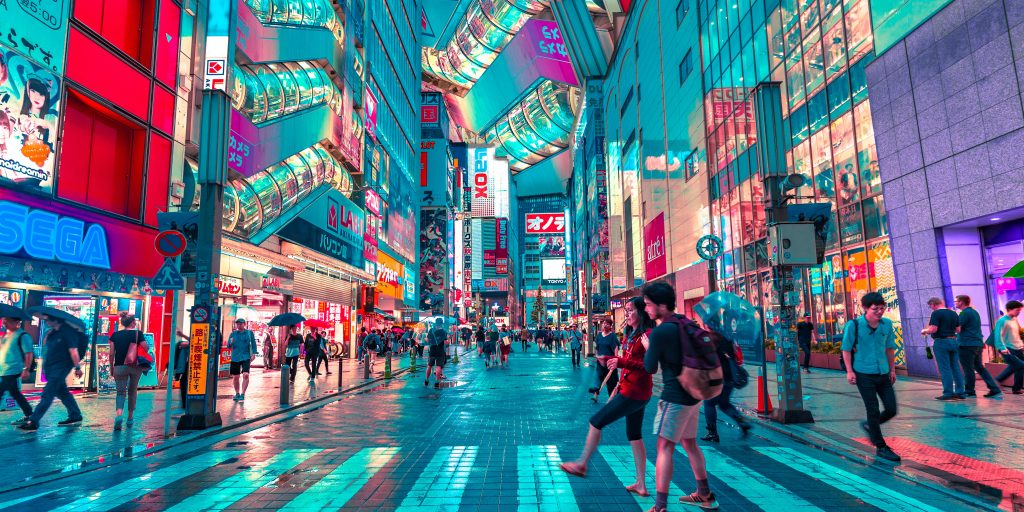 Society 5.0 and its application to American smart cities

As The City of Birmingham, Alabama kicks off a new rapid transit bus system project, its Japanese sister city, The City of Maebashi, is developing its own transportation overhaul focused on mobility as a service (MaaS). The two cities, though 6,769 miles apart, are inextricably linked by similar infrastructure challenges, such as aging populations, urban congestion and a lack in public transportation.

What’s special about their relationship, is their approach to infrastructure needs as social issues and the creation of solutions through technology-based, human-centric design. In Japan, this approach is now being implemented in smart city projects under the national vision called “Society 5.0”.

Society 5.0 builds on the understanding that human evolution has graduated through four previous phases: primitive, hunter-gatherer societies, agrarian societies, the Industrial Revolution, and the era of digital information. Now, humans are on the cusp of our next evolutionary step to Society 5.0, characterized by the convergence between cyberspace and physical space. This means people, things and systems are all connected in cyberspace through tools like IoT sensors, while advanced technologies like artificial intelligence (AI) conduct analyses and output results. This information is fed back into the physical space – bringing new, previously impossible value to people and economies. In short, the goal of Society 5.0 is to realize a data-driven, human-centric society where economic development and solutions for social issues harmonize.

Across 157 areas in Japan there are currently 229 smart city projects in action. Each of these projects are driven by the desire to solve unique problems that are shaped by regional and geographical characteristics, many of which a “human-centric” Society 5.0 approach is applied. Solutions are created through collaboration between public, private and academic partners.

Maebashi, for example, has the highest car possession rate in Japan but few public transportation options. In addition, almost 30 percent of residents are 65 or older. Over time, as these residents can no longer drive, large parts of Maebashi’s population will become isolated without access to public transportation. To address this problem, Maebashi city planners have focused on pilot projects to be completed in the next five years that leverage a MaaS platform.

As one of the highest-tech countries in the world and one of the first to begin experiencing social issues tied to urban infrastructure, Japan is well positioned to pioneer solutions and serve as a guide to American cities anticipating, and in many cases already facing, similar challenges. 455 diplomatic sister city contracts between U.S and Japanese cities create opportunities for communication between state and local government officials, private sector businesses and academic institutions about challenges and real-world applications of the Society 5.0 concept.

Birmingham’s new rapid transit bus (BRT) system is a project in many ways equivalent to the Maebashi MaaS project. Both Birmingham’s new BRT and MaaS aim to improve existing transportation through human-centric solutions. The adoption of Society 5.0 allows cities to create platforms where cyber and physical spaces interact and ultimately deliver better outcomes for residents. As Maebashi and Birmingham look to address future issues, discussion and collaboration between the cities will surely result in better solutions for each city.

Partnerships, in both public and private sectors and especially within academia, will be key to a successful American implementation. This piece was an important takeaway from the Smart Cities Summit panel on bridging the U.S.’s rural connectivity gap. With the goal of human-centric design, we must first unlock economic opportunities by engaging a variety of leaders and building their awareness. Everyone must understand that, in this next evolutionary phase, it’s critical to approach infrastructure problems by framing them first as social issues and inviting all stakeholders the table.

Dr. Atsushi Deguchi is the professor and the Vice-Dean of Graduate School of Frontier Sciences at The University of Tokyo where he specializes in the academic field of urban design and planning. He is also the Director of the Hitachi and UTokyo Joint Research for Realization of “Society 5.0” and Next Generation Smart City.  An English version of the book, Society 5.0, is expected to be published this year.