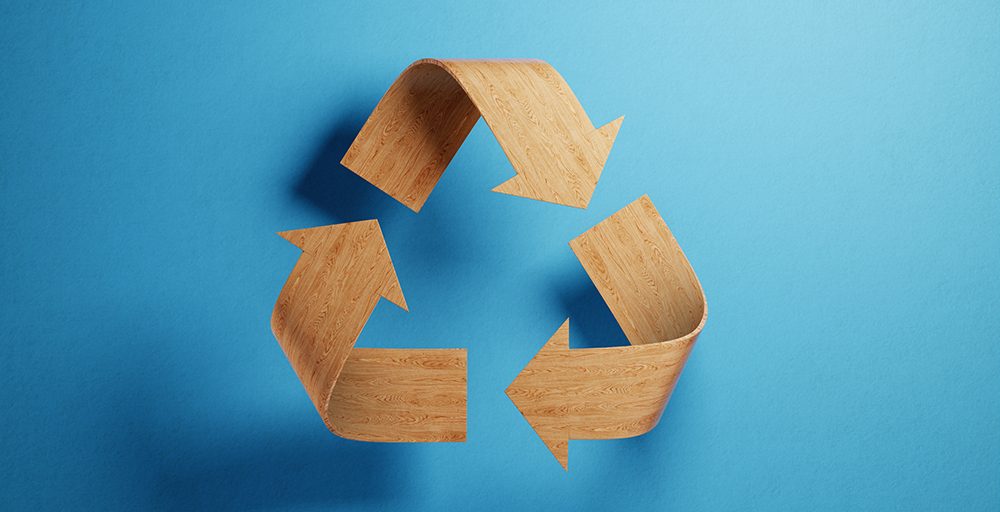 If you visit Camp Small — Baltimore’s municipal wood waste collection yard — these days, you can buy logs, wood chips and brush that city crews have obtained from municipal trees.

About once a year, the city would hire a contractor to remove the large piles of wood waste to make room for more, which Preston estimates cost between $65,000 to $70,000 around 1990.

That changed in 2016 when Baltimore turned Camp Small into a wood reutilization site, Preston says. Baltimore’s Office of Sustainability and Department of Recreation and Parks secured a $98,000 city innovation loan to hire the yard master and buy equipment to screen through tree waste. The city began selling this wood in raw form to pay the loan back.

Even before 2016, Camp Small’s tree waste had unutilized value that was being wasted by sending it to a landfill. Diverting “waste” material like this from landfills, creating jobs to repurpose it for new use and then handing it off to fulfill that new use is illustrative of a concept called the circular economy that is informing municipal zero-waste initiatives across the country.

It’s a valuable concept to understand, as it can help both promote sustainability and save money.

What is the circular economy? 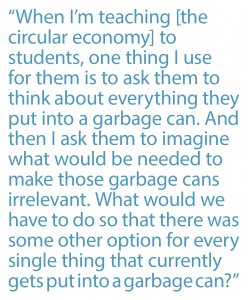 In this linear economy, we take materials from the environment via methods like mining ores or harvesting crops. After reaping resources from the environment, we then put them into a production system — like putting metals into products — and sell the products. A consumer buys the product and uses it until they no longer want it. What usually happens next? The product is thrown out.

“Then, we really don’t have many other options but to throw it into a landfill,” Russell says. “So, we have all of these materials and all of this value that’s extracted from the environment, and then we’ve created no system to recover that value, to keep those materials or those products or all of the inherent value in the system.”

“So, that’s where circular economies step in,” she adds.

A circular economy, in contrast, is “restorative and regenerative by design,” according to “Cities in the Circular Economy: The Role of Digital Technology,” a report by Google and The Ellen MacArthur Foundation, a U.K.-based organization that advocates for the move to a circular economy.

Unlike the “take-make-dispose” linear economy model, a circular economy “aims to keep products, components, and materials at their highest utility and value at all times, whilst distinguishing between technical and biological cycles,” the report states. 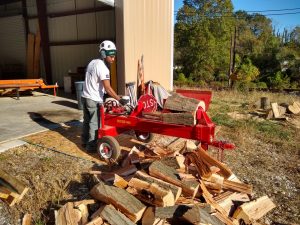 Reusing items keeps them from landfills, but it also prevents the need for buying a new product, Russell says. Repairing accomplishes the same goal. Some companies are even remanufacturing products — taking and disassembling products and reusing functional parts.

“Rather than assuming that end-of-life means that it just goes to landfill, there’s all of these efforts to capture and retain that kind of value,” Russell says.

Those efforts are valuable for a city like Austin, Texas, which in 2011, adopted its zero-waste master plan. The plan set a goal of having zero waste, or 90 percent diversion from landfills, by 2040, according to Gena McKinley, strategic division initiatives manager for Austin Resource Recovery, the city’s solid waste utility.

Part of the city’s plan for getting to that goal is a suite of initiatives that comprise Austin’s Circular Economy Program. The goal of the program, as laid out on its site, is to, “attract, retain, and grow businesses, non-profits, and entrepreneurs in the zero-waste industry in order to create well-paying local jobs, attract investment, and support the necessary infrastructure for a resilient circular economy in Central Texas.”

These programs include the Austin Materials Marketplace, an online platform that allows for business-to-business reuse for waste and by-products materials, McKinley says. The Austin Reuse Directory is another online tool that helps Austin locals find places to donate or sell used items to local reuse organizations, McKinley says. People can shop for reused tools there too.

Community clinics called Fix-It Clinics let anyone in Austin bring items in disrepair — from a broken blender to a ragged shirt — to a skilled volunteer coach who will help educate people on how to repair those items and extend their usage, according to McKinley and the program’s site. This program alone has resulted in 1,803 pounds of material diverted from landfills.

While Austin’s Circular Economy Program housed in Austin Resource Recovery, it functions as a partnership with the city’s economic development department, McKinley says. Moreover, a major part of the day-to-day task of carrying out the Circular Economy Program involves making connections throughout Austin’s community. “We’re constantly connecting and partnering with all kinds of different people,” she says.

The power of partnership 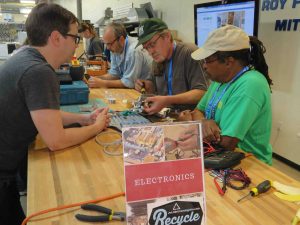 One of Austin’s Fix-It Clinics, community events in which Austin residents can take items in disrepair to skilled volunteer coaches who will then help the resident fix the item.

Like Austin, partnerships are a hallmark of Phoenix’s Reimagine Phoenix initiative, which seeks to achieve a 40 percent diversion rate by 2020 and zero waste by 2050, says Phoenix Assistant Public Works Director Joe Giudice.

“Our job in the solid waste utility for Phoenix is to manage the waste that people throw away or no longer have a use for,” Giudice says. “We really started to change our view of that as not just garbage, essentially, but as a valuable product that someone manufactured… and how do we recover, recapture the value out of those materials and create or sustain new economies [with] new economic development like manufacturing those products into new products that people desire?”

Phoenix has since taken a slew of actions to get closer to its waste diversion goals and to promote the idea of the circular economy.

The city partnered with Arizona State University (ASU) to create an incubator program that seeks to find startups that want to make new products out of waste or grow circular economy-related ideas, Giudice says. ASU incubates the businesses, which in turn get access to the city for testing.

Phoenix also became the first major U.S. city to become a member of the Ellen MacArthur Foundation in 2016, a news release shows. ASU also joined the foundation. “I think one of the major benefits in joining Ellen MacArthur is, it’s been an incredible network for us,” Giudice says, citing recycling-related conversations with Keurig Dr. Pepper as a result of the city’s membership.

Since land is a key component of economic development, the city turned some of its spare land into its Resource Innovation Campus (RIC) and made the land available for companies to lease to develop other circular economy models, according to Giudice.

Currently, the city has its 27th Ave. Compost Facility on the RIC, which processes about 55 tons of yard waste and food waste per year, Giudice says.

Previously, the city had an agreement with a company called Palm Silage in which the company was going to build a manufacturing facility that would have allowed it to take palm fronds and remanufacture it into animal feedstock, according to Giudice. However, the city and the company ultimately parted ways.

This provides a key lesson with these sorts of innovative partnerships and investments — they don’t always succeed.

“This is a case where we were hopeful that it could be successful. It just didn’t seem to work out for the two organizations,” Giudice says. “We couldn’t make that particular one work; that doesn’t mean we don’t keep looking.” 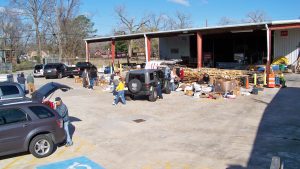 Not every city may set a zero-waste goal for itself, and not every city has the means to institute comprehensive programs like Austin’s or Phoenix’s, though.

But cities can take long-term approaches to make closing the loop easier for people.

“In any sort of recycling or collection or even reuse for that matter, the barrier is facilitating collection and recovery and achievement in an efficient manner… But this is where cities come in,” Agrawal says. “They could provide collection facilities, collection mechanisms, that sort of very quickly aggregates materials and products across customers, but that then becomes cost-effective for companies to collect those from a more centralized stocking point.”

“Building the collection infrastructure or facilitating it or even subsidizing it could be ways to achieve that,” Agrawal adds.

Baltimore had a tree waste collection facility in place at Camp Small for decades before it became a wood reutilization site. Wood aggregates quickly, and Preston is able to sell it inexpensively for new purposes rather than send it to a landfill.

Since 2009, Houston’s Reuse Warehouse has built and continues to facilitate the infrastructure for collecting used construction materials and making it freely available to nonprofit organizations, according to the city’s website.

The warehouse, which was an empty, unused city property, accepts any kind of building materials from anyone — individuals and large corporations alike, Houston Reuse Warehouse Manager Keith Koski says.

The building materials stay out of the landfill, and the warehouse gives everything away for free to 501(c)(3) nonprofit organizations, charities, schools, universities and government agencies who come into the warehouse and select the items they want. People can take as much as they want from the warehouse.

The Reuse Warehouse demonstrates the visual component of the circular economy— ensuring that used items continue to retain their utility and stay out of landfills across multiple cycles of usage — particularly well, as the same materials can be donated to and claimed from the warehouse multiple times.

Koski cites a general example he’s seen of an organization donating grayed yet usable wooden fencing in favor of installing nicer-looking fencing. The used fencing goes to the Reuse Warehouse, and performing arts groups will pick up the wooden fencing for free and use it for stage sets.

“Often, they will bring it back and then another high school for the performing arts or something will use that same stuff over again,” Koski says. “So, I guess the big point is, we’re able to take a deeper scoop out of the landfill because we don’t have to concentrate on… stuff that looks good enough that you can put a price tag on it. Because it’s free, we can give away or reuse uglier stuff.”

Not wasting items is a cause that many can get behind. Accordingly, Koski says everyone likes the Space City’s Reuse Warehouse — including people who may not be interested in sustainability or green initiatives.

“They like this program because it’s like they’ve grown up [being told] ‘don’t waste the food on your plate.’ And so, they don’t like to waste useful things,” Koski says. “So, they may not say ‘resource recovery’ or ‘circular economy’ or ‘ecology’ or ‘green,’ but they just don’t like things to go to waste.”