A police officer reaches for his sidearm. Image via Wikipedia. 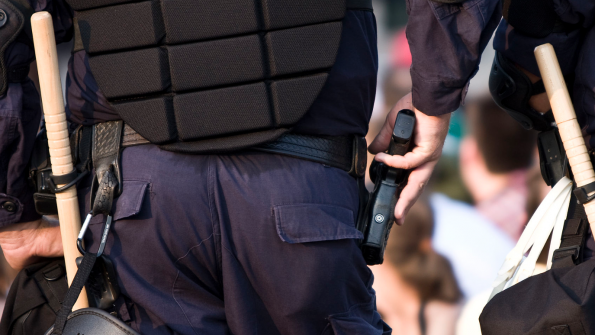 The Fresno City Council voted 3-2 this week to give city leaders 90 days to evaluate the potential impacts of partnering with a controversial non-profit to reduce violent crime in the city.

The organization, called Advance Peace, describes itself as an advocacy group dedicated to ending cyclical an retaliatory gun violence in American cities by investing in the development, health and well-being of those most effected.

Advance Peace works by paring at-risk individuals with a partner – part mentor, part social worker – to help keep them on the straight and narrow, according to The Sun. If these individuals meet certain personal and professional goals, they are paid on a sliding scale.

To qualify – Dyer said he didn’t oppose the program’s work, but he feels it should be paid for exclusively with private funds, according to the Sacramento Bee. He added there are many other publicly funded initiatives in place that can effectively curb gun violence in Fresno.

What would later become Advance Peace began as the Office of Neighborhood Safety in 2007 in Richmond, Calif., as a method to reduce gun violence, according to Mother Jones. The program worked through a mix of data mining, bold outreach and meaningful mentorship.

Team members sift through police records and their own intelligence to identify those most likely to engage in gun violence, or to be shot themselves, Mother Jones reports. Those individuals were offered a spot in the program which eventually leads to a stipend if they abstain from criminal activity. While it’s difficult to prove causation in such a situation, murder rates in the city fell.

Based on the success of the program in Richmond, other cities in California are working with Advance Peace, including Stockton and Sacramento, with mixed results, the Bee reports.

Fresno Council members Luis Chavez and Nelson Esparza are hopeful the program can be effective in their city and feel its methods have been misrepresented in the media, according to the Bee. It’s not simply paying dangerous people not to engage in gun violence, it’s about meaningful intervention at critical moments in peoples’ lives.

“It’s not the city paying folks money to not shoot someone,” Chavez told the Bee. “That’s not what this is.”

Advance Peace solicits five-year commitments from cities, the Sun reports, totaling $3 million in spending split between the city or organizations on behalf of the city and the organization. After the five-year run, cities are responsible for complete funding.