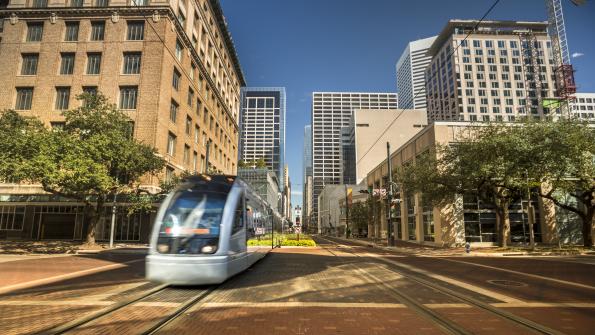 With the rise of on-demand transportation services, cities are rethinking their transit systems and what their role should be in managing these networks.

Eric Hannon a partner and member of the leadership team of the future mobility initiative at McKinsey & Company and a co-author of the report “An integrated perspective on the future of mobility” says the way people move through urban environments is ripe for change. As more on-demand transportation services become available, cities need to take the role of transportation manager, rather than simply the provider.

One of the most obvious changes going on right now is that people are starting to foregoing personal vehicle ownership in favor of on-demand transportation, he says, and as a result the border between public and private infrastructure is starting to blur.

“If I take an autonomous shuttle let’s say, I don’t really care if that’s owned by the port authority of New York or if it’s operated by an independent Uber-type company,” Hannon says. “The lines between private and public start to blur from the consumer perspective.”

Much of this movement is driven by the private sector’s response to consumer needs and the emergence of new technologies to solve old problems Hannon says. This means the role of government will change in its approach to mobility.

“I think the fundamental change we’re going to need to see cities make is to go from a provider of transportation services to the manager of a transportation system,” Hannon says. “Right now, municipalities provide seats on buses or subways – they provide access. It’s pretty passive.”

Art Guzzetti, vice president of policy at the American Public Transportation Association, says this attitude is taking hold in the transit community, and that rather than viewing services like Uber and Lyft with trepidation, successful transit agencies are embracing them as partners.

“There’s a lot more private sector in the landscape today, but that’s a good thing,” Guzzetti says. “The challenge transit agencies are facing is that they have to adapt to these changes, but that’s an opportunity to serve our communities better.”

The simple fact is that in most cities, transportation is a legacy system, and the opportunity to innovate is rare; however, with private sector options joining in, the whole system itself can be bolstered. Guzetti says for a transportation system’s public and private elements to be complementary, rather than disrupting each other, governments need to step in with regulatory frameworks to ensure growth is guided.

“We have to encourage innovation – that’s a given,” he says. “Entrepreneurship needs to be facilitated, and if that causes a little bit of pain in the transit world, we have to adapt to the changing world around us. In the end, the public will be served better.”

What we’re witnessing now, Hannon says, is the growing pains of such systems emerging. Companies like Uber and Lyft have been tremendously disruptive to traditional systems, and in some cases, have led to more congestion and confusion. However, as more cities begin to understand the role of these services and begin to leverage them to mutual benefit, he says transportation systems will streamline themselves. Yet, this cannot happen without deliberate guidance from city leadership, and a modified understanding of the role of transportation manager rather than provider.

“[You need to see] yourself as the manager of a transportation system where you use new modes of transportation to provide an overall better system,” he says. “If I’m using autonomous shuttles to move people back and forth to a subway – the major backbone of the system – that’s a system that works better overall, but you need someone to manage that system. It’s unwise to assume the market is going to regulate that.”

It’s a problem of seamlessness, Hannon says. Currently, transportation systems grow independently of one another without much consideration being made for how the system functions holistically. “Cities are starting to realize this is an issue,” Hannon says, “but I don’t think anyone has really cracked this yet.”

One company working to solve this problem is Bird, a provider of on-demand electric scooters in about two dozen cities across the country. Founded by Travis VanderZanden, former COO of Lyft and vice president of international growth at Uber, VanderZanden was looking for an opportunity to solve the last mile problem – meaning that in urban environments often times travelers are faced with a trip that is too short to dive but too far to walk. VanderZanden thinks eclectic scooters can solve this issue, and overall, the progress has been positive, according to a Bird spokesperson.

The system works through a smartphone app. Once a user has created a profile, the app will show the user where the nearest scooter is located. The user then scans a QR code on the scooter’s handlebars to unlock the vehicle. The user is then charged $1 to start and 15 cents per minute. Since the vehicles are dockless, they can be left anywhere for the next user to locate, the spokesperson said.

In theory, the system works, but as with most new disruptive technologies there have been a few kinks – most notably in San Francisco, where the city recently announced it would ban the scooters on June 4 while it works to make their operations safer. The city specifically had an issue with people riding the scooters on the sidewalk and cluttering the entrances to businesses. The city simultaneously announced its new “Powered Scooter Share Permit Program” in attempts to guide the process, according to materials from the City Attorney’s office.

“San Francisco supports transportation innovation, but it cannot come at the price of public safety,” City Attorney Dennis Herrera said in a statement. “This permit program represents a thoughtful, coordinated and effective approach to ensure that San Francisco strikes the right balance. We can have innovation, but it must keep our sidewalks safe and accessible for all pedestrians. We can have convenience, but it can’t sacrifice privacy and equity along the way. This program is a strong step forward. It provides the framework to ensure that companies operating in the public right of way are doing so lawfully and are accountable for their products.”
While these issues are being worked out in San Francisco, Bird is working to partner with other local governments and maintain the relationships it’s already built. One way of doing this, according to the company spokesperson, is through its Save our Sidewalks pledge. Taking into account concerns that the scooters are cluttering public right-of-way, Bird has now committed to picking up scooters every evening to be recharged and repaired, the spokesperson said.  They’ve also dynamically capped the growth of the program based on utilization in certain cities to make sure the scooters put on the streets matches demand for their use. The company is also committed to giving a dollar a day per vehicle to the city with the intention of helping maintain current transportation systems.

“Through community support, we can really ask what the goals of cities are, and how can our service help them reach those goals,” the Bird spokesperson said. “The company sees itself as being complementary to existing transportation systems. Bird’s goal is to be a last-mile solution.”

Bird is demonstrating a commitment to Hannon’s concept of blurring the lines between private and public infrastructure and cities partnering with third-party services to make transportation systems more efficient. As more companies like it come online, our city’s transportation networks will continue to evolve and adapt, ultimately becoming seamless.