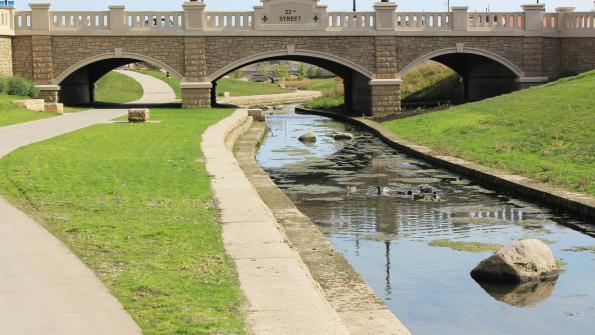 Flash flooding is such an issue in Dubuque, Iowa that it caused $70 million in damage and led to six presidential disaster declarations between 1999 and 2011. Over half of Dubuque’s population lives or works in its historic Bee Branch Watershed area, where stormwater runoff consistently flooded streets and homes on its way into the adjacent Mississippi River, according to city documents.

Across the country, Tavares, Fla., sits on Lake Dora, which the U.S. Environmental Protection Agency (EPA) has classified as impaired waters. That status is partly due to the city’s old stormwater system, which would discharge runoff directly into the lake while causing local flooding issues, according to Tavares Utility Director Brad Hayes. As part of a citywide rebranding and economic development effort starting around 2007, Hayes sought to rehabilitate and improve the city’s stormwater and wastewater infrastructure.

Over the past three years, both cities used green infrastructure to solve their stormwater problems. However, these projects also created and beautified new greenspaces that invite the public to both enjoy these new areas and to learn how the new solutions manage stormwater.

Conversely, green stormwater infrastructure (bioswales, rain gardens, etc.) uses soil, vegetation and other natural elements built into the environment to treat and reduce stormwater at its source. Green infrastructure is highly efficient at capturing and conveying water, and it mimics natural systems and ecologies in decentralizing stormwater treatment, according to Fox. “To the untrained eye, it looks like just a piece of the landscape, it looks natural,” he says.

Green infrastructure provides auxiliary social and environmental benefits like carbon sequestration and promoting wildlife, and it also gives people better access to nature, which was a major motivator behind Tavares’ Ruby Street Stormwater project. There was a swampy wetland behind the Lake County Jail “that everybody had written off,” Hayes says; however, he secured an inter-local agreement that let the city use the wetlands for stormwater treatment.

Tavares officials eventually constructed an eight-acre walkable park named Tavares Ecological Park that contains five small cell ponds of different depths. Within these ponds are “bee mats,” or floating islands with plants that filter out pollutants. Stormwater swirls around the ponds and is filtered through the bee mats, ultimately discharging into the lake.

The city’s main thoroughfare, Ruby Street, runs on the edge of the park and has been prone to flooding in the past, Hayes says. As part of the project, Tavares officials replaced 80-year-old stormwater pipes underneath Ruby Street with a large transmission pipe, which transmits stormwater into the park’s ponds while preventing flooding in the city’s streets.

To prevent flooding in its area, Dubuque took an opposite approach to Tavares—workers excavated a storm sewer that had been buried in the early 1900s, and they converted it into an aboveground creek.

This creek, now dubbed the Bee Branch Creek Greenway, is what Dubuque Civil Engineer Deron Muehring calls “the key component” of the city’s larger Bee Branch Flood Mitigation project. Upstream detention basins capture stormwater, while the creek carries that stormwater downstream into the Mississippi River in an unrushed manner to avoid flooding streets and houses. The creek also contains floating planter islands similar to Tavares’ bee mats that filter pollutants out of the stormwater stream. The creeks open into a pond that ultimately drains into the Mississippi River.

What’s more, restoring the creek was cheaper than the cost of installing gray infrastructure. The project “wasn’t driven by this idea that we wanted to be green at the time. It was the other kind of green — we wanted to save green,” Muehring says with a chuckle. “That was the original reason why we were looking at the aboveground creek.”

Built between June 2015 and July 2017, the creek restoration has saved Dubuque green in another way. A storm that dropped 4.9 inches of rain on Dubuque in under 24 hours in 2002 caused $11.6 million in property damage, but during a similar storm that dropped 4.9 inches of rain in under 24 hours last summer, property damage was mostly avoided, city documents show.

In May, five inches of rain fell in Tavares within an hour, and the new stormwater system adequately sucked up rain and prevented flooding in the streets, Hayes says. While the system is currently functional, overall construction for Tavares’ Ruby Street Stormwater project is expected to conclude this July, two years after it started.

Appearance is essential to a green infrastructure project, as an attractive piece of infrastructure will likely yield more public appreciation and thus better sustainability in ensuring a longer lifecycle, Fox says.

“The appearance has to balance the technical requirements of the hydrology and the stormwater with those elements of appearance that are going to keep the nearby residents enjoying it and appreciating it and hopefully maybe even helping to maintain it,” he adds.

When Dubuque officials first gathered input from residents, they revealed that they didn’t just want an aboveground sewer in their area — they wanted a stormwater solution that they could access and experience.

To that end, the city built a multi-use trail system, small amphitheater, lighting, benches, a play area and bioswales around the creek, while planting a public orchard, community garden and numerous shrubs and trees around it as well, according to city documents. As Dubuque residents have footed part of the bill, Muehring says that officials wanted to build something that the entire community could enjoy.

The creek and its amenities haven’t just brought people — they’ve attracted a local beaver and frog population. Muehring says that work to increase conveyance underneath railroad tracks will help increase fish population in the stream, as well.

Being the city’s entertainment district, Ruby Street itself has also undergone a major transformation. After installing the new transmission pipe under the road, the city is conducting a major streetscaping project to bury power lines, install decorative lighting, plant more trees and repave the street with ruby-red bricks.

To truly appreciate the systems, both cities have made education a priority and have installed educational plaques throughout the areas to inform the public about the locales’ stormwater issues, green infrastructure’s functionality and why it all is so important. Dubuque has also built an outdoor classroom by its creek.

“We try to keep citizens engaged and informed about everything we’re doing. We try to be as transparent as we can,” Muehring says. “And that was just another way to add to that transparency.”

This necessary transparency extends to organizations, businesses and governmental agencies, as well, but this is easier said than done. Both Hayes and Muehring admit that the largest challenges with their respective projects occurred not in their construction, but in working with other entities throughout the process.

Dubuque officials encountered challenges even before designing the new creek. Being built in a low-income community, residents expressed angst at the potential for displacement, and officials had to work with over 100 property owners on the relocation process.

Due to the area’s historic designation, the city had to execute an agreement with the Army Corps of Engineers and multiple Iowa agencies to outline their strategy. The city also encountered issues in the bidding process due to the multifaceted nature of the project.

The projects’ multifaceted approaches have attracted interest from organizations, universities and governments. Both Dubuque and Tavares have won awards for their projects, and the Florida Department of Environmental Opportunity plans to use Tavares’ project as a model for other cities to construct as part of a grant funding program, Hayes says.

On May 30, Hayes retired from his position at Tavares. He voices pride in leaving a legacy behind with the Ruby Street Stormwater project and improving the city’s stormwater management, community development and public education.

“I’m going out on a high note with a project that will live for years and years to come,” Hayes says. “People will remember me for… helping to enhance the culture and the education for the City of Tavares.”