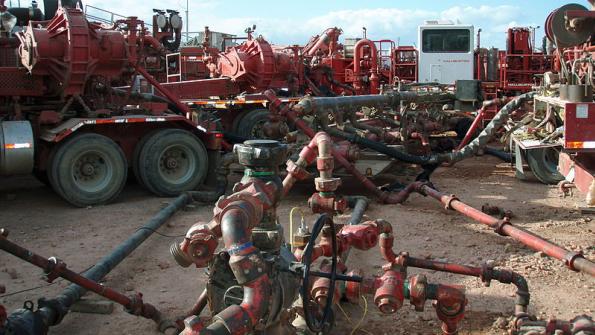 Local governments, citizens take stands against fracking in their communities

As the effects of fracking continue to be realized, some local governments are banning the practice in their communities. In some instances where a government has tried to further regulate the practice, citizens have pushed to ban the practice altogether.

As the effects of fracking continue to be realized, some local governments are banning the practice in their communities. In some instances where a government has tried to further regulate the practice, citizens have pushed to ban the practice altogether.

Fracking, or hydraulic fracturing, involves drilling into the earth and shooting a high-pressure mixture of water, sand and other chemicals into the rock to release natural gas and oil from shale rock, according to the BBC. However, the chemicals can contaminate groundwater at the site, and the process can cause earth tremors.

On June 18, Chatham County, N.C., has extended a moratorium on oil and gas drilling that was first enacted in August 2015, according to The Herald Sun. The new moratorium is set to end on Jan. 31, 2019. At a public hearing, 14 residents advocated its extension.

"It is a devil's bargain," Chatham County Chairwoman Diana Hales said, per The Herald Sun. "It is not clean, and getting it is not clean. It certainly is not clean for anyone living by it who has to live with the day-to-day water and air pollution. We have promised as a board that we are going to do what we can to protect Chatham County."

Norwalk, Ct., passed a fracking waste ban ordinance on May 22 that bans the transport and storage of fracking waste within the city, according to The Hour. In doing so, Norwalk joined 45 other Connecticut municipalities in passing such a ban.

The response was so positive that the city received a Climate Champion Award from Live Green, The Discovery Museum and Planetarium, and the Greater New Haven Clean Cities Coalition for their efforts, The Hour reports.

“Norwalk does want to be a green community and everything that we can possibly do to add to that, to do the things we need to do, to save energy, use more sustainable energy and reduce our carbon footprint is always something that’s desirable,” Norwalk Mayor Harry Rilling said, per The Hour.

In some instances however, a government may support the regulation of fracking while its citizens do not.

Such was the case in Lafayette, Colo., whose city council was set to vote on new regulation rules for the fracking industry on June 19, according to The Daily Camera. Before the council could hold the vote, a group of protesters shut down the meeting, pressing the council to instead ban the practice in the city.

Local anti-fracking group East Boulder County United has threatened to sue the Lafayette government if it made efforts to regulate oil and gas, citing conflict with the city’s climate bill of rights, according to the Camera.

The rules if approved would require mapping flow lines in the city, setting setback requirements and include ground and air pollution reduction, according to the Camera. The proposed Lafayette rules mirror those of Boulder County, in which it is located. However, not all of the city’s council members are on board with the proposed rules.

"It's not a surprise that people are pissed off at this (expletive)," Lafayette Councilwoman Merrily Mazza said after the June 19 meeting, per the Camera. "They're not buying the regulations, and frankly I'm not buying them either."