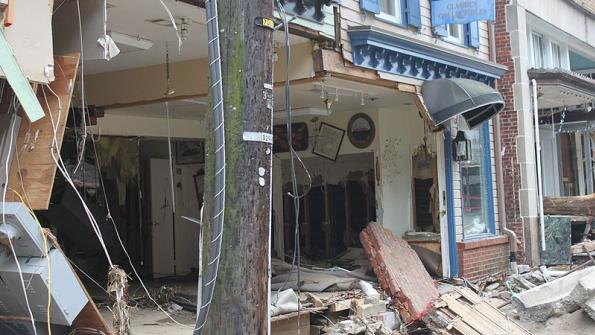 Flooded Maryland city and county rebuild amid worries about future

Questions loom about Elliott City, Md.’s future as the city and Howard County, Md., try to rebuild after the second ‘1,000-year flood’ in two years slammed into the city.

Questions loom about Elliott City, Md.’s future as the city and Howard County, Md., try to rebuild after the second ‘1,000-year flood’ in two years slammed into the city.

On May 27, Ellicott City received almost eight inches of rain in a six hour span, according to Fox News. The rain caused torrential flooding throughout the city, as the VOA News video below shows.

Just two years before in July 2016, six inches of rain inundated the city in two to three hours, Fox reports. However, Howard County Executive Allan Kittleman said that this year’s storm was worse than the prior one.

As more rain was forecasted to hit the city in the days after the flood, Howard County ramped up its flood mitigation preparation, Ellicott City Patch reports. County staff removed large amounts of debris from multiple areas, installed temporary curbs, sucked out materials lodged in pipes and installed tarps and sandbags to certain areas.

Plans to rebuild aren’t comprehensive, though. A 25-foot chunk of a county road called Ellicott Mills Drive, broke off and washed away during the flood, according to Washington TV station WTOP. However, no plans have yet been announced for when the street will reopen, as doing so is an expensive and multifaceted endeavor.

Longer-term rebuilding comes with many worries. Donors and residents have expressed reluctance to contribute to a rebuilding city that might get washed away again soon, the Baltimore Sun reports.

Now, the city has even more damage to repair — the Guardian News video below shows the extent of the damage to Ellicott City.

Kittleman has not specified if the county is altering its 2017 watershed master plan, but county officials are consulting with business owners and residents on planning the city’s future, WTOP reports.

“We’re talking to the property owners to find out what they want to do, how they want to move forward,” Kittleman told WTOP. “We’re going to have a great place to live, work and play here for another 250 years — but it might look a little different.”

Long-term rebuilding plans include replacing a culvert, repairing sidewalks checking drainage systems and removing debris from both roadways and waterways, according to the Sun.

The Federal Emergency Management has awarded Maryland and Howard County over $1 million to pay for projects that will help to reduce the flood risk along the Main Street area, according to Fox.

“I’ll tell you, in all frankness, the discussions we had after 2016 will be different now in 2018,” Kittleman said at a May 31 news conference, per the Washington Post. “This is a game-changer; 2016 was, too, but to have two of these in two years is a real game-changer, and we’ve got to figure out what’s the best way to move forward.”