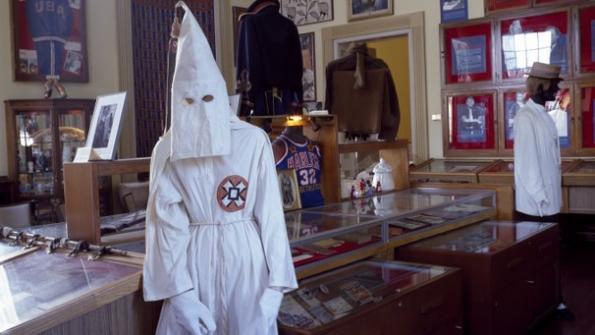 Across the country, people have been finding Ku Klux Klan recruitment fliers with increasing frequency. When they complained to their local officials, they got a few different responses.

Across the country, people have been finding Ku Klux Klan recruitment fliers with increasing frequency. When they complained to their local officials, they got a few different responses.

Many defended the fliers’ freedom of speech, while reiterating their rejection of the message. A few jurisdictions are exploring the potential issuing of charges for non-speech-related reasons.

Hatboro, Pa., residents recently awoke to bags containing candy hearts and Klan recruitment pamphlets on their lawns, the Associated Press reports. Hatboro Police Chief James Gardner called the pamphlets “distasteful at a minimum,” and said that his department was investigating over concerns of "someone going in the middle of the night and putting things on people's lawns."

The municipal government made clear that it didn’t condone the message in the fliers. ”Hatboro is a community where we respect each other and we are better than hatred," an official statement from the borough reads, per Hatboro Patch.

While the Hardy County, W. Va., Sheriff’s Office defended the right to free speech for pamphlets found in Wardensville, W. Va., the office has asked local locals to report wherever they find the pamphlets, which are often weighed down by birdseed, West Virginia TV station WHSV reports.

“We are very respectful of the First Amendment and the right to free speech, even when we don't agree with the content, but these flyers cross the line of littering or worse If they are thrown at citizens,” a statement from the sheriff’s office says, per WHSV.

Medford, Ore. officials defended the distributors’ First Amendment rights when citizens complained and said they would not be pursuing any legal action against distributors. City police said that they received some complaints about the language, which is protected under the First Amendment, the AP reports. Lt. Justin Ivens told the AP that the department is “not even going to get involved in it.”

Five Medford residents complained to the Medford City Council about the fliers, according to Oregon TV station KTVL. While Mayor Gary Wheeler defended the First Amendment’s freedom of speech, he added that the city doesn’t support the fliers’ message. “The City of Medford values diversity and condemns hate,” he said.

Earlier in May, a split Vermont Supreme Court overturned the 2016 conviction of a man who had left Klan fliers at the houses of two women of color, the Burlington Free Press reports. William Schenk had been charged with hate crime-enhanced disorderly conduct and was sentenced to 120 days in jail, but argued that the fliers were protected speech.

"We do recognize that any communication from the Ku Klux Klan complete with symbols of the Klan, particularly the burning cross, would raise concern and fear in a reasonable person who is a member of an ethnic or racial minority," the majority opinion states, per the Free Press. "We are not ruling today whether the Legislature can make criminal such action or has done so in a different statute."